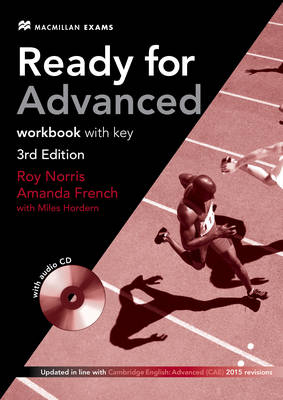 In its third outing, Ready for CAE has been retitled Ready for Advanced, in line with Cambridge Assessment’s 2015 revision of both exam name and content. A classroom stalwart since first publication in 2004, this new edition retains its overall look and layout: the 14 units remain with the same titles and each is divided into Language Focus, Vocabulary, Reading, Use of English, Listening and Speaking.

For many students (and teachers), units or lessons which follow the same format can be dull. In Ready for Advanced, there is no predictable pattern: you might start with a reading, go on to vocabulary, then focus on grammar before writing and listening. This variation helps keep momentum going. Regarding the balance of language study versus language skills activities, the book has this about right, with a focus in each unit on two of the key areas of grammar practised at this level.

The useful Review section remains at the end of every unit, with grammar or vocabulary practice and exam paper task types. These sections can be used for self-study/homework or as short, end-of-week tests.

The best features for me are the Ready for Reading/Listening/Writing/Speaking sections spaced throughout the book. I use these as initial introductions/ overviews of the various parts of the exam: they are handy, condensed versions of what students can expect and great for awareness-raising in class. Similarly, the hugely-exploitable Wordlist at the back of the book remains, with a focus on collocation and fixed phrases, and the comprehensive Grammar reference presents the grammar from all 14 units in clear, easily-navigated sections.

The Listening scripts are all there and clearly labelled. For self-study students a version of the coursebook with an Answer Key is available. Sample writing answers are provided, as are listening scripts with the answer part underlined. This is actually incredibly useful for teachers too, as it means you don’t need to take into class the separate Teacher’s Book.

What I like in a coursebook is a reasonable mix of text and graphical input per page, not the feeling of clutter. Here, while some visual accompaniments bring the topic or text to life, others feel gratuitous and there only to fill space. I could only guess that the cartoon drawing of a rich, suited man and two smiling employees was supposed to represent look up to (p. 63). Some of the illustrations I found childish (pp.108, 113, 193) and purely decorative, rather than integral to learning and teaching. Where visuals are vital in an exam book is as prompts for the long turn and collaborative task. Here, the photos look fresh and unambiguous. Still, given that the new format/task type for the long turn is candidate response to three pictures, I was surprised to see that the task on page 122 remains totally unchanged from the 2008 edition, when even then the visuals looked dated.

The unit topics are those typically used in the exam (by necessity showing a sanitised view of the world), for example: the home, food, relationships, and so on. Within the broad topic students are able to express views on things above the mundane: in one unit, they are introduced to ‘dumbing down’ and asked if people in their own country have greater or less cultural knowledge than previous generations; they are also asked to speculate what hardships Chinese migrants had to face in a new country. One listening makes reference to Maori culture, another to minority languages. The cultural tone overall is generally appropriate for the age and maturity of the target users – in my own context, older teens and young adults in a mainstream, UK language school.

Given that the Part 1 compulsory task is now an essay with a discursive focus, there could be the danger of essay overkill. But this is handled well through the book, with an obvious gradation from very guided to free practice. Unit 4 gives a two-and-a-half page focus on essay structure and style, with a model and a ‘How to go about it’ advice box; Unit 7 requires interpretation of input via a chart, with a model text presented as a gap-fill for key linking words and phrases; by Unit 12 students are simply faced with the essay question and are flying solo.

Teachers know from the exam handbook that students at this level must be able to underline relevant salient issues on a topic and support an argument; with such essay topics as Obesity in Schoolchildren and Sustainable Tourism there is scope for discussion with a vocal class. Linguistically, Unit 7 has a useful focus on strong adjective and noun collocations which could be used for similar essays (urgent action; practical steps; stricter laws), but overall I would have expected a wider focus on and practice of linking words and phrases through the book than just the six expressions in Unit 7. What is a useful inclusion is the writing assessment criteria, which can help learners consider their written work more efficiently, and there is some input on register, as well.

There is extra material in the Ready for Writing section at the back of the book, including the various Useful Language for (essays, reports, proposals, letters, reviews) boxes, but the information on these pages is very dense and would have to be exploited in a more ‘headsup’, interactive way in a whole-class environment.

As for changes, I identified eight reading texts as completely new: gone is the Ellen MacArthur story of the 2008 edition; now we meet the 17-year-old Polar explorer Parker Liautaud. The attempt in some other areas of the book at updated content is more minimal: Unit 6’s All in the Mind reading is exactly the same, with only the photo of the TEFL-ubiquitous David Beckham being replaced by Cristiano Ronaldo. With the new exam task type (Part 6 crosstext multiple matching), the authors have obviously had to include reading texts for practice. The task entails comprehension of four short texts by different writers on a similar theme, followed by four cross-text multiple matching questions. We meet this task type in three of the units.

One of the things I liked about the previous editions of Ready was the focus on lexis. Advanced candidates need exposure to idioms, fixed phrases, phrasal verbs, affixation, internal change, compounding and semantic precision, all of which are routinely tested in Use of English. Throughout the book there is a strong emphasis on groups of words, particularly collocations, and not just single-word items: the Vocabulary sections of the book introduce students to Changes, Deception, Smell, Anger and Sleep amongst other more prosaically-titled slots like ‘quantifying nouns’ and ‘attitude adverbs’. There are useful consolidation sections, and students are exposed to the lexicon through a range of vocabulary exercises. In most cases there is enough space for answers to be written without the need for miniscule handwriting.

One omission is a focus on pronunciation (mind you, none of the other Cambridge Advance coursebooks I looked at included it). Given that pronunciation has equal weighting with grammar and lexis, discourse management and interaction in the Speaking test, it seems odd that no section of these books deal with such C1 features as varying intonation and placing sentence stress correctly to convey nuance or mood, word stress and juncture. As it stands, teachers will have to supplement the book with pronunciation activities that benefit individuals and the whole class.

The online component consists of two practice tests with model answers. There is also a video of the complete Speaking test. Clicking on the Dictionary option at the top takes you to the Macmillan Dictionary, with its fascinating Blog, Buzzword and Open (crowdsourced) dictionary for the latest on-trend lexis.

Teachers need to be creative and imaginative in bringing out the best in a coursebook. This is a comprehensive course offering thorough preparation, but its format, layout, typography and colour palette lend it a lightness that make working with it not seem like a chore.

Clare Henderson has been a teacher at Bell Cambridge since 1994 and her interests are contemporary English and testing.