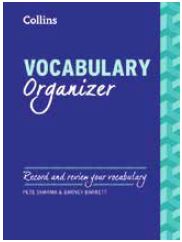 ‘Teacher, I need more vocabulary!’ The cry is a familiar one, whether one teaches general, business or academic English. It brings to mind Wilkins’ famous comment that, ‘without grammar very little can be conveyed, without vocabulary nothing can be conveyed’ (Wilkins, 1972). A limited vocabulary means a limited ability to understand both spoken and written language and leads to immense frustration for students who cannot express themselves in their target language.

However, as any teacher knows, the teaching of vocabulary, whether contextualised in reading and listening tasks or targeted in games and quizzes, does not always lead to the learning of vocabulary. If words are to ‘stick’, they must be encountered many times in meaningful contexts.

So what does it mean to ‘know’ a word? This is a question explored by Sharma and Barrett in the Introduction to this book. Many students believe that once they’ve recorded a word next to a translation then they ‘know’ the word. Unfortunately, subsequent encounters often prove this not to be the case. In Sharma and Barrett’s view, knowing a word may include knowing its: Meaning or meanings; forms; pronunciation/word stress; spelling; collocation; connotation; register; synonyms and antonyms; etymology.

In other words, translation alone does not reveal the full ‘meaning’ of words, which need to be explored and tested, indeed, ‘played with’ as children do naturally with their L1. Collins Vocabulary Organizer provides, in a limited way, a framework for such exploration, encouraging students to reflect on the relevance of new terms to their own learning situation and develop a richer sense of ‘knowing’ a word.

The aim of the Organizer is to provide a tool for self-study, a guided notebook rather than a guidebook. Sharma and Barrett describe their target audience as pre-sessional and university students. However, the book would be equally useful for General and Business English students. Indeed, the latter would be more likely to make use of the section on phrasal verbs, for example.

Users are encouraged to arrange their new vocabulary in ways that are most relevant to them, prompting them to consider the frequency and importance of the lexis they record. A software designer, for example, may record a word like icon one way, while a student of religious studies will take a different approach.

In terms of structure, the Organizer is made up of four sections:

The Introduction takes readers through the key principles of vocabulary learning, explaining terms like collocation and register, and setting exploration tasks, many of which direct students to the Collins COBUILD Advanced Dictionary (no surprise there; this is a Collins publication). However, while the Organizer could be seen as a companion text to the COBUILD dictionary, it would work equally well with other learner dictionaries.

The ‘meat’ of the Organizer can be found in Section 1. Here we encounter six different areas in which to record new language. Each begins with one or two sample pages, illustrating how students can use the area. Depending on the student’s linguistic competence and their familiarity with this type of recording system, in-class exploration could be very useful. Classroom activities provide a chance to test ideas, to compare approaches to learning and reviewing vocabulary and to get feedback from the teacher.

The first of these areas contains mind map templates, here referred to as My word maps, a now-familiar technique of clustering ideas around a central idea in a spider-like form. By selecting key concepts and highlighting relationships using imagery and colour, mappers aim to render ideas (or lexis) more memorable. The Organizer gives examples for topic areas, e.g. Technology and language learning, but maps also work well for collocations, idioms, and even spelling patterns. This is clearly a useful tool but I wonder whether students wouldn’t benefit from guidance (in the form of labels?) on how to select and rank items. Without added support, will it be clear that the overarching concept forms the core while each branch leads to a related but more specific idea or example?

The second area, My New Words, encourages students to record lexis they want to retain for production. Four columns allow them to record the word, the meaning (in English), an example sentence and a translation. Students are thus able to build a highly personalised mini dictionary, something they can refer to quickly when reading or writing on related topics. That said, the models given provide no record of word class or pronunciation, a surprising omission, as this is useful information, especially when students are expecting to produce these terms. Could phonetic script, or at least stress patterns, be added to the models to encourage students to do likewise?

The following three areas focus on lexical phrases: phrasal verbs, collocations and idioms/expressions. The benefits of non-native speakers learning ‘chunks’ of language, such as multi-word items, collocations and institutionalised expressions, have long been recognised. In the Organizer, all three sections offer three columns in which to record the phrase, the ‘meaning/translation’ and an example.

And this is one of the real merits of this book – encouraging learners to think of vocabulary as more than just single words. After all, words have ‘friends’: certain nouns only combine with certain adjectives (lexical collocation) and most verbs are followed by specific prepositions (grammatical collocation). The inclusion of these pages is very helpful. The only quibble I have is that students of academic English, the stated audience, generally need to be steered away from phrasal verbs and towards their Latinate equivalents.

At the end of Section 1 we come to My Key Words, an area where students can record high-frequency terms in greater detail. The Organizer provides a page per word, allowing a full exploration. Here users have space to record the word, concept area, meanings, forms, collocations, pronunciation, as well as boxes for notes and example sentences. Teachers might like to introduce students to this kind of analysis in class, asking pairs or teams to work on selected words before peer-teaching them to classmates. For students working independently, the fact that there are only 24 of these pages should force them to consider which terms are most important to them. If they do need more pages, the model structure can always be transferred to their own notebooks.

The second half of the Organizer concentrates on vocabulary for recognition, allowing users to create an A–Z list of vocabulary for this purpose. The pages here have only two columns: one for the words, one for meaning/ example. If users want to remember word forms or pronunciation, they will once again have to get creative, adding extra information, such as word class, themselves. However, the personalised nature of the list increases its relevance to the individual and should allow for rapid retrieval.

The final section serves as an appendix and is packed with short but useful language notes. The Academic Word List is described, along with an explanation of how corpora and concordances work, and the options for electronic dictionaries. All have web references. These are followed by a glossary of linguistic terms, a pronunciation guide that uses both phonetic script and example words, and a list of easily confused words. Some of the latter – such as affect and effect – are common causes of errors. Others, though, are more obscure. Do students really puzzle over bough and bow?

Overall, Collins Vocabulary Organizer is a useful tool for language learners. My own pre-sessional students were keen to get their hands on copies as they felt it would help them record new language in a structured way. They would use it, they said, for reviewing language, but also for support when writing essays.

As a teacher, though, what I’d really like to see added is a section on word formation. Like McCarthy, O’Keefe and Walsh (2010), I have found that ‘learning the most common prefixes and suffixes, their meanings and how useful or productive they are (that is, how many new words one can form with them) could increase a learner’s vocabulary very rapidly’. Such a section could easily be incorporated into the introduction.

The next step for Collins is surely to turn this Organizer into a digital notebook, i.e. an app for use on pads or phones, offering interactivity and useful links. Pronunciation data, in particular, could be expanded and improved. And why not add a self-testing function? If that happened students really would be queuing up for it!

Alison Carse teaches in the Language Services Unit at Anglia Ruskin University, working with students on pre-sessional and in-sessional courses.