A Syllabus for Listening: Decoding 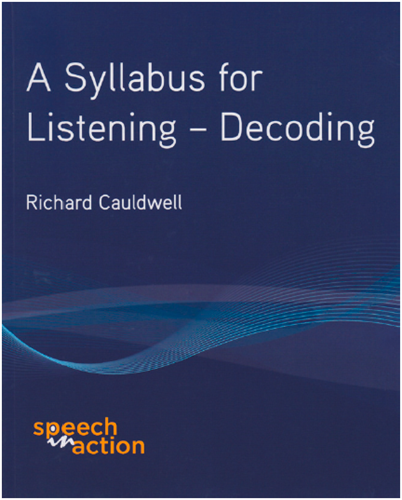 One of the biggest complaints that students have about the teaching of listening in English classes is that it seldom prepares them for the real world – and what could be more demotivating than achieving high marks and apparent competence in classroom listening, only to find that in the outside world you can’t understand the simplest of interactions? Published teaching materials tend to employ scripted or semi-scripted recordings, which may have hesitations of the um and er variety artificially injected into them to mimic natural speech, but which rarely encompass the entire range of linguistic features that competent speakers employ – and which can so easily trip up those not used to hearing authentic speech. However, plunging beginners or even intermediate learners into the real world of utterances delivered at breakneck speed, words running into one another, slurred sounds, missing syllables, whole chunks of grammar omitted, changes of mind or direction mid-sentence, and all the rest, would seem cruel in the extreme. The answer, according to Richard Cauldwell, is to teach them to decode the sounds they hear, by giving them an understanding of what typically happens to words in the faster and more disorderly speech that is characteristic of daily life outside the classroom.

The aim of this book is to bridge the gap between classroom listening and real-world listening by improving the teaching of listening, so that all listening activities include an element of decoding. By doing this, it moves the teaching of listening away from merely gaining understanding of a particular spoken text to equipping the learners with the tools that will give them a better chance of understanding any spontaneous speech out in the world beyond the classroom.

The book is divided into four parts. Part 1 analyses why the teaching and learning of listening is currently less effective than it could be, looking at ten key ideas within its ten chapters. These include the fundamental differences between decoding speech and writing, the role of different styles of speech, the gap between what expert listeners believe they hear and what is actually present in the sounds uttered, and the multiple soundshapes that words can adopt. Particularly important and pertinent to the rest of the book is the idea in Chapter 2 of seeing the sound substance of speech in terms of a greenhouse, a garden and a jungle. The greenhouse is where a word is enunciated clearly and in isolation, like a cherished potted plant under careful cultivation. The garden is where connected speech occurs, with words ‘hanging out’ with other words and changing each other as they come into contact. Just as in a well-ordered garden, the words occur in pleasing and fairly orderly combinations, and the overall effect is genteel and agreeable. The jungle, however, is where all hell breaks loose; it is the domain of unruly, messy speech, where anything goes, and listeners can encounter extreme speeds and huge variations in clarity. Traditionally, the world of ELT is comfortable with the greenhouse and the garden, but fights shy of entering the jungle, though this is where the learners will ultimately find themselves, and where they will be most sorely tested.

Part 2 is a critique of conventional approaches to training, theory and practice. It probes the elements in early teacher training and teaching experience that militate against an efficient method of teaching listening, the obstacles that may seem ‘virtuous’ because they have other educational benefits, but which have negative side effects for listening, the prescriptive rules about speech that dominate the world of ELT, and the approaches to the timing and content of decoding activities that might make a big difference.

Part 3 contains a syllabus for teaching listening by means of decoding. This is divided between four chapters, each of which contains an important element of the syllabus: words, word clusters, streamlining (consonants) and streamlining (vowels).

Part 4 has six chapters with ideas, tools and activities to implement the listening syllabus outlined in Part 3. It begins with a key element: ways in which teachers can change their own mindset as regards listening, as well as that of their students, so that both have a more positive attitude to listening and decoding speech. Innovative classroom activities are suggested for teaching decoding, exploiting recorded material and classroom language.

Sound files to accompany the book are available to download from the Speech in Action website. Additional recordings, a subject index, worksheets and updates are also available online.

This is a widely-acclaimed book that teachers, teacher trainers and materials writers will find invaluable, especially if they are determined to get their students out of the artificial world of the greenhouse and ready to take on the jungle.