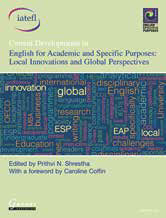 This is the fourth collection of papers from what has become a very successful collaboration between Garnet Education and the IATEFL ESP SIG. The three previous volumes were all edited by Mark Krzanowski, but the current editor contributed papers to both the 2008 and 2009 collections and has co-authored two in this current collection, so the continuity of this venture is now well established.

The book under review consists of 12 chapters, and includes work by academics working in Australia (4); Britain (7); Hong Kong; Japan (2); New Zealand (2); Pakistan; Spain and the USA (3).

Clearly, in a review of this kind, it is impossible to do justice to all the contributors, but a close look at three papers may help to give a flavour of this collection.

The first is Jennifer Cope’s From critical analysis to critical literacy in ESP; Developing skills for greater understanding of UK, US and Australian language texts. This paper has the advantage of being universal in scope. The dominance of the British and American publishing industry in EFL/ESP/EAP textbooks is such that, even with the best intentions, a certain level of cultural assumption inevitably shows through. Byram (1997: 61) reminds us that ‘The process of working on texts involves an understanding of otherness which implicitly challenges their taken-for-granted perceptions of themselves and their world, simultaneously requires a reassessment of their perceptions of a specific society, and introduces the issues of cultural relativity.’ This is put into context with a sentence from The Independent newspaper of 23rd September 2008: ‘The star player of Labour’s football team has scored a spectacular own goal.’ No one, reading it in isolation, could be expected to realise that it was taken from an article concerning the regulation of British financial institutions. The metaphor itself, of course, assumes total familiarity with the rules of Association Football. It is hardly surprising that Cope concludes that ‘the amount of intertextual and other references … could make the understanding … of texts difficult for those who are unfamiliar with the surrounding contextual factors’ (p22). This, in itself, raises the question of the extent to which ESP/EAP practitioners should introduce entirely authentic texts to their students, although there is the counter argument that students are ill-served if such texts are ‘dumbed down’. Cope herself advocates the use of an eight-step framework to assist readers in deconstructing text, but again this might run the risk of beating the text to death, and it is hard to see how it could ever be applied to anything longer than a couple of pages. There may be no easy answers here.

Equally vexed is the question raised by Prithvi Shrestha and Saba Mansur in The EAP course quagmire; Juggling the stakeholders’ perceived needs. This paper is remarkable for both its extensive bibliography and for its frank admission that ‘Inclusion of administrators in this process has emerged as one of the most important factors so that EAP practitioners are not met with hostility when implementing the course’ (p106). Teaching never takes place in a political vacuum, and the authors consider the national and institutional constraints involved in teaching MBA students in Pakistan. They then examine the course offered at an Institute of Technology in Islamabad from the perspectives of the MBA students themselves, the institute’s administrators and the EAP teachers. Both quantitative and qualitative research was conducted, with the hardly surprising result that wide discrepancies appeared. So far as the students were concerned, reading was felt to be the least important skill ‘despite the demand that higher education places on students in terms of reading academic material’ (p100). The students also believed that their writing, listening and reading skills were good to excellent, while both the administration personnel and the EAP teachers felt that those same students were ‘not up to the mark’ (p101).

The authors admit that this is a preliminary study, and one which has effectively resulted in deadlock because so much needs to be done. At the same time, they now propose conducting a diagnostic assessment of student needs and the establishment of a credit-bearing pre-sessional course for those students who come from non-English medium schools. Non-credit bearing support facilities could also be offered to students who require further assistance with their studies. All this appears to be eminently sensible, and has been proven to work in other institutions, particularly in the Arab Gulf.

The final paper to be considered is Issues for developing ESP courses for dieticians working in ‘global communities’ in Japan by Akiko Tsuda and Clare Furneaux. This paper reflects the demands of a modern phenomenon unique to Japan, where increasing numbers of non-Japanese speaking caregivers and nurses have been recruited to meet the demands of an aging and declining population. Japanese speaking dieticians are increasingly required to interact with these healthcare professionals, and also with other foreign workers, despite the fact that their own professional training still has no English requirement. The figures quoted by the authors suggest that just over 9 million foreign workers and their dependents are currently resident in Japan, so this is an area of considerable concern.

Following a 2-year research project, 11 topic clusters regarding the English language education of trainee dieticians were established, but the data came from 22 English language teachers, 57 discipline-specific teachers and only 3 administrators. Interestingly, many of the discipline-specific teachers felt that their students’ numeracy and literacy were ‘not up to the mark’ even in Japanese, and many of them lacked experience of practical work as dieticians, and so were unaware of the basic problem. There was, therefore, a lack of consensus among the stakeholders, and to counter this Tsuda and Furneaux suggest implementing Dudley-Evans & St John’s (1998) framework of cooperation model. ESP practitioners will thus be required to act as teachers, collaborators, researchers and evaluators, but this may be the only way in which the other stakeholders, in a predominantly monolingual and homogeneous society, will be brought to appreciate that globalisation is affecting their communities.

That, moreover, is the overall message of this collection. Local innovations must now be regarded in the light of growing global influences. This is a book which raises important sociolinguistic issues and it is to be hoped that Garnet Education and the IATEFL ESP SIG will continue to explore these, and to offer fresh insights from more diverse societies.