The development of critical thinking skills in English for Academic Purposes (EAP) students is a major area of interest for teachers in the sector. While teaching on a sessional EAP course at a university in New Zealand, I used a range of supplementary materials to develop a three-stage framework to assist students in developing their critical thinking (CT) ability. As it was not possible to cover very many aspects of developing this crucial CT skill in the time allocated for critical thinking in the course, this framework seemed like a viable option to cover the core content. The three stages included critically evaluating their self-assumptions, critically evaluating academic articles on a macro-level and critically evaluating academic articles on a micro-level in terms of the language used. Ultimately, I hoped that this could lead to students developing the ability to critically evaluate their own writing once they developed the ability to be more critical of what they were reading.

Published books focusing on CT development tend to not necessarily highlight the development of this vital cognitive skill in English language learners per se. In addition, in terms of the available literature on the development of CT within EAP-specific programmes, there appears to be limited resources. The exception is in sections of certain popular published language learning textbooks such as the Cambridge Academic English Advanced by Hewing & Thaine (2012). Also, Dummett & Hughes (2019), in their book on critical thinking in ELT, explore and provide essential techniques to develop critical thinking in English language learners. Although they do not focus on EAP learners directly, many of the skills and techniques described can be used in an EAP teaching context.

The first stage in the framework focuses on learners developing the ability to evaluate their own personal assumptions in relation to decision-making and actions. This stage is based on Brookfield’s (2012) three self-evaluation assumptions. Brookfield (2012: 7) defined assumptions as ‘mental guidelines to what we consider to be truths’. The first, causal assumptions, relate to if statements (cause and effect) about our beliefs. For example, If I study hard, I will pass my examination. The second, prescriptive assumptions, relate to our notions of desirable ways of thinking. For instance, Good teachers should be able to respond to cultural diversity in their class. As indicated in the example statement, these prescriptive assumptions often include the use of modals such as should. The last of Brookfield’s assumptions, called paradigmatic assumptions (classic), are arguably the most challenging for learners to identify as they are cognitively so deeply seated in our beliefs and approaches to life that we are often not aware that they are assumptions. For instance, the notions of patriarchal or matriarchal societal structures and the assumed roles of women and men. For my students, this last concept was clearly the most challenging and some of my students really grappled with the idea of identifying their own paradigmatic assumptions.

For each of these assumptions, my learners spent some time in class developing and sharing some causal assumptions, then some prescriptive assumptions and, lastly, some paradigmatic assumptions. These shared assumptions could generally be held by a group of people, or they could be assumptions that students personally adhere to in their individual lives.

Following the identification of assumptions, students were encouraged to evaluate these assumptions and how they thought these may manifest themselves in people’s visible behaviour.

The approach to this initial stage was adapted from Brookfield’s (2012: 11) four aspects of assumptions namely, hunting for assumptions, checking assumptions, seeing things from different perspectives and taking informed actions.

“One of the points highlighted at this stage is the fact that the choice to use hedging is not necessarily because the writer is uncertain about what is written, but that it may display different messages for the writer such as caution and respect for fellow writer’s work.”

The next stage relates to learners’ ability to ask and answer critical questions about the readings they would use for their assignments. Initially they evaluated texts by identifying them as literal texts (information) or analytical texts (opinion) based on the work of Brick (2011). In this phase, learners were invited to bring topics or readings from their mainstream disciplines (many of the students who did this EAP course came from a range of different disciplines such as Media Arts, Finance, Business Management, Education and Psychology) that could be used to further develop an awareness of their perspectives of issues and what other potential perspectives exist around the topics of the chosen readings.

Students were first given a couple of example questions to analyse a sample reading text. These questions included Do you agree with the positions of the writer? Why/Why not? and Is evidence used appropriately? Why do you think it is or why do you think it is not?, to develop this evaluating phase. Working in groups, learners would try to answer these questions and provide reasons for their answers. After that, learners were given an opportunity to develop more critical questions related to their chosen discipline-specific articles. After developing the questions, students explored potential answers based on the evidence in the text. Once they had some practice with these, they were encouraged to think about how these questions and their responses to the questions may relate to their assumptions and perspectives. Leading on from that, students worked in groups to try and develop some evaluative questions of their own. Following on from that, they were given a list of potential questions they could use, compiled from a variety of resources, including the following questions from Brick (2011):

What approaches are the authors using?

Are the claims reasonable?

Do they refer to all evidence or are they selective?

Are appropriate methods used to gather the sample?

Are statistics reported on appropriately?

For teaching hedging, a range of resources was also used, but the main resource used in developing this framework was an article by Hyland (1994) based on the work of Skelton (1988) (as cited in Hyland, 1994) on hedging and covering five main hedging structures, as shown in Table 1. 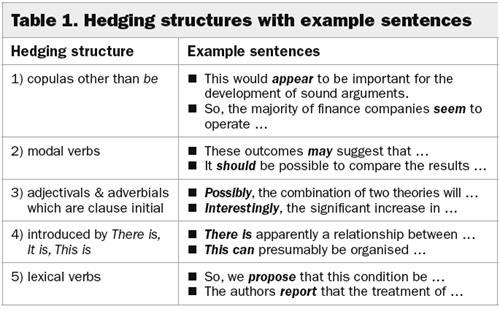 One of the points highlighted at this stage is the fact that the choice to use hedging is not necessarily because the writer is uncertain about what is written, but that it may display different messages for the writer such as caution and respect for a fellow writer’s work.

Once learners have had practice with working through the three stages on their chosen discipline-specific article, they are encouraged to use the framework to evaluate their own writing. Essentially, I think this three-stage framework can potentially be adjusted in a number of ways to teach critical thinking to lower level EAP students as well. For example, by only focusing on modals for hedging, or only developing a limited range of critical questions, or only focusing on the first two types of Brookfield’s assumptions. In addition, by varying the amount of materials used for each stage, we can target a range of different language learner levels.

Anthea Fester (PhD) is a senior academic staff member at the Waikato Institute of Technology. She teaches on the New Zealand Certificate in English Language programmes (NZCEL). She has a PhD in EAL curriculum and syllabus design from the University of Waikato, where she has had extensive teaching experience in EAP, applied linguistics and language teacher training.