Some time back, a colleague of mine had a birthday and what looked like the entire staffroom went to an Italian restaurant to celebrate the occasion. I ended up seated beside another colleague’s husband, who was a Spanish-native speaker and an expert user in English. In an attempt to organise the drinks, I casually asked him, ‘Are you beer-ing it? Or shall we order a bottle of wine between us?’

He squinted at me and tilted his head to the side, and then said, ‘Beer-ing? That’s not a word though, is it?’

He grimaced and then said, ‘You made a mistake then.’

I hummed and hawed a little and eventually shrugged and said, ‘Well, I suppose.’

Shortly after, when making polite conversation, he asked me, ‘So what language do you teach?’ and when I said, ‘English’, his expression of surprise made me realise at that point that he was all along under the impression that I was not a native speaker of English.

That made me wonder.

If he had known that I was a native speaker beforehand, would he still have said that I made a mistake when I invented the word ‘beer-ing’?

After all, when native speakers make up an expression, they’re being creative. We call it poetic licence.

But when non-native speakers make up an expression, it’s a mistake.

Or am I mistaken?

Several months ago, I wrote a blogpost on the teaching of idiomatic expressions, and how we go about deciding which idioms to teach in the language classroom.

A poll was carried out and 45 people kindly responded.

Here are the results, and my analysis and commentary on it.
(Do note that my commentary represents my own opinions and speculations and are in no way attempts to draw any empirical conclusions from this questionnaire) 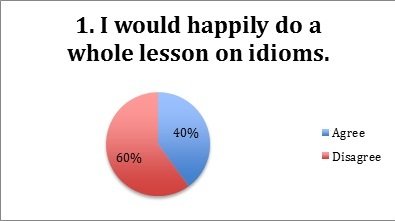 It was interesting to see that although the majority saw idiomatic expressions as lexical items that they would clarify and teach when they emerge (whether it be through a text or a discussion), 40% of respondents would do a whole lesson on idioms. 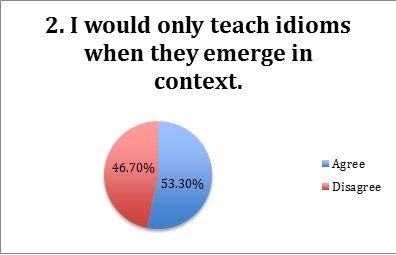 The jury’s definitely out on this one (pardon the idiom!)

But quite a few respondents have said that they are not going to wait for the idioms to emerge and would prefer to be prepared with the ones that they are going to teach. Not a surprise considering the answer to Question 1. 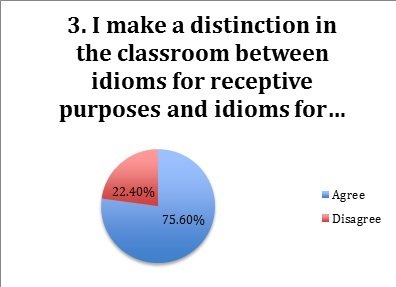 Interestingly, a striking majority showed an awareness of the difference between teaching idioms that students can use to understand what is being said or written, and idioms that we would encourage students to use, and that they do put such awareness into practice in the language classroom. This could be seen as a constructive step towards preventing unilateral idiomaticity in international/intercultural situations. 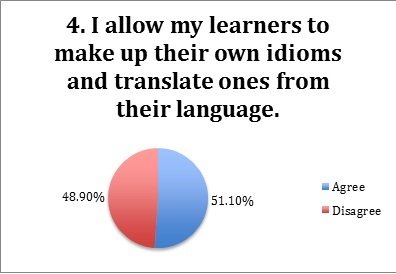 Another interesting result that suggests that many teachers not only acknowledge the positive aspects of encouraging creativity in our learners, but also recognize the fact that language is not simply something that is prescribed and copied. While the language we speak shapes the way we communicate, we also bring our own identities into the way we use language and we start to own it in our own special ways.  Social Constructivist, Prof. Dr. Kurt Kohn talks about the construct of ‘My English’ in this video, where learners inevitably bring their individual experiences of the world into the language acquisition process. In my English and my experience of the world, ‘beer-ing it’ is looking like a very useful construct.

5. Would you teach the following idioms to your class in your context?
(By teach, I mean clarify Meaning, Form, Pronunciation and Usage) 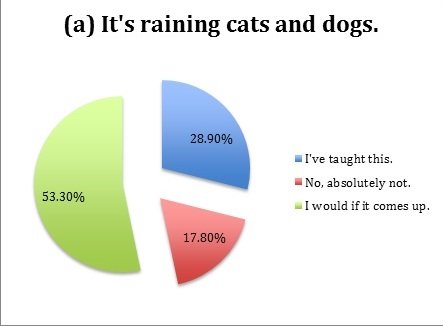 Compared to the other idioms in question 5, this one has the highest number of respondents who have taught it. Yet, it also has the lowest number of respondents who said they would teach it if it comes up. Perhaps there’s a growing suspicion that this is not an idiom that is used with much regularity these days? Not unlike idioms such as ‘in the pink of health’, this might be one that is on its way out. 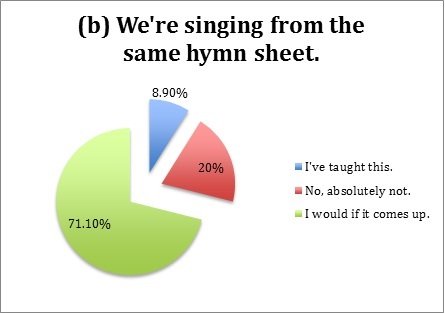 Like the rest of the idioms in Question 5, the majority of teachers seem happy to teach this if it comes up in context. However, this is the one idiom that has the fewest number of teachers admitting to teaching it, and the highest percentage stating that they would absolutely not teach it. Could it be that the religious origins and connotations of this idiomatic expression has led some to be more careful and apprehensive about including it in our lessons? 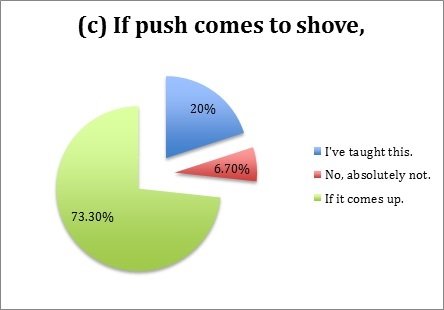 This idiom had one of the highest number of respondents saying they had taught it, second only to ‘It’s raining cats and dogs’.  In a similar vein, this idiom saw only 6.7%, the smallest percentage of respondents declaring that they would absolutely not teach it, compared to the 20% who would not teach ‘It’s raining cats and dogs’. Could this perhaps be due to the fact that this idiom is often used in business scenarios and therefore contains more surrender value in global communications? 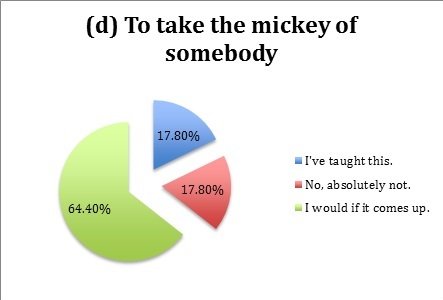 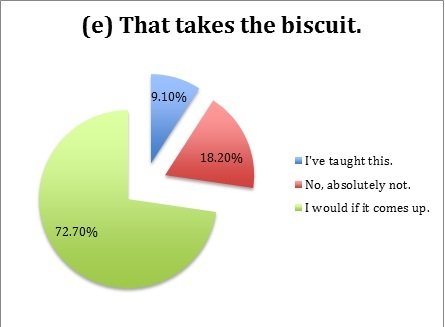 Both ‘To take the mickey of somebody’ and ‘That takes the biscuit’ are extremely British idioms that would leave most Americans perplexed and confused. Like  most of the other idioms in Question 5, the majority opted to teach these two idioms if they come up, while just under 20% adamantly refused to teach them both under any circumstances.

Interestingly, ‘That takes the biscuit’ saw only 9.1% of respondents saying they have taught it, with only ‘singing from the same hymn sheet’ scoring a lower percentage of 8.9%. While one is tempted to say that this could be because of the localised and colloquial nature of this idiom, the 17.8% scored by similarly colloquial ‘to take the mickey of someone’ suggests that the latter could perhaps simply be perceived as a more frequent and common idiom.

What are your criteria for selecting the idioms that you teach?
Select three of the following. 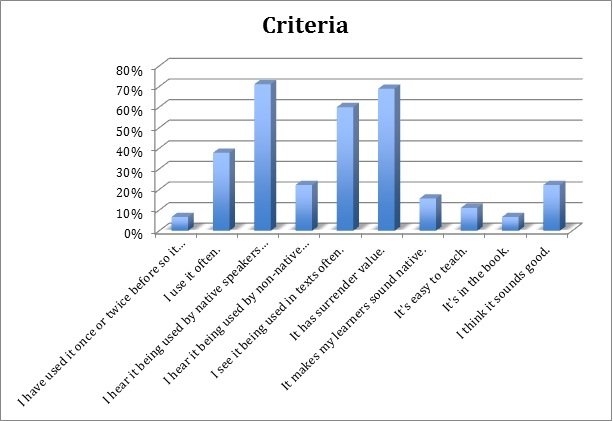 The top three most popular criteria used to decide which idioms to teach clearly shows that the frequent use of an idiom in texts (60%), by native speakers (71.1%) and the idioms’ surrender value (68.9%) were priorities for our respondents.

Sometimes the usefulness and surrender value of the idioms were judged by how often the respondent themselves use the idiom (37.8%), and both native-speaker use and the respondents’ own use of the idiom were deemed more important criteria than the regularity at which non-native speakers might use the idiomatic expression. In other words, if I were a non-native speaker, ‘beer-ing it’ would just not be considered useful or acceptable.

Interestingly, 22.2% would choose to teach an idiomatic expression because they think it sounds good. And not surprisingly, the most re-assuring piece of information for me here is the fact that most of the respondents would not teach an idiom simply because it appears in the coursebook.

Perhaps I could argue for the teaching of ‘beer-ing it’ because it sounds good, because I’m a native speaker and I use it, and because it definitely has a high surrender value as it saves a lot more time than having to say ‘I’m going for the beer option’?

So are you beer-ing it tonight?  *wink*

A self-confessed conference addict, she spends a lot of her time tweeting (@chiasuan/@ETprofessional), Skyping, and writing. You can find out more about her on her blogsite:http://chiasuanchong.com