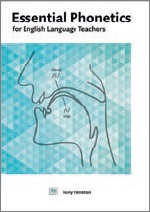 There are several titles on the market which are basically pronunciation handbooks for beginner teachers, the target audience for Essential Phonetics for English Language Teachers (EP). What is immediately different about this one is its length. Weighing in at a slim 48 pages, the author Tony Preston calls it a booklet but is at pains to point out (p5) that the brevity does not imply low priority; on the contrary, he refers to work in English as a Lingua Franca, which posits pronunciation, not grammar or vocabulary, as the main factor in communication breakdown. Rather, EP is selective in its approach. The aim is to give relatively uninformed teachers a basis to understand and correct the spoken errors of their learners. EP works from the realisation that simply repeating a corrected version of the pronunciation mistake back to the learner does not work. Learners must be told where (in the mouth) they went wrong, so teachers need a grounding in articulatory phonetics, ‘our main instrument when explaining sounds in the classroom’ (p7).

Two thirds of the material is dedicated to sounds, with the treatment of consonants and vowels separated by a section on their realisation in connected speech. For both consonants and vowels, the approach is strictly classroom-centred with a section on articulation followed by a Difficulties with consonants (vowels) section. Mouth diagrams do not feature very heavily, on the reasonable grounds that they are readily accessible in other pronunciation books and the internet. Preston (p9) comments that most sounds are difficult or impossible to model for learners (try demonstrating the position of the tongue in a /k/ or /w/), so some degree of illustration is necessary. Videos, well beyond the scope and means of EP, are even more useful and titles such as Cruttenden (2014) utilise these extensively. However, the select mouth diagrams EP does contain are neatly drawn and effective, for example the close and open corner vowels (pp23–24) and the notoriously difficult /l/ and /r/ distinction (p16), which is accompanied by a clear and accurate commentary.

The biggest dilemma in a title as compact as this is what to include and what to leave out. Preston has done a good job in putting the essential information across succinctly with the inexperienced reader in mind. For instance, it is correct (p10) that ‘tense’ and ‘relaxed’ are better descriptors for voiceless and voiced consonants respectively because the amount of energy needed to articulate them is actually more significant than the voicing distinction, which is variable and context-dependent: in dad the first /d/ is partially devoiced and the second is completely devoiced. In turn, ‘tense’ and ‘relaxed’ are more user friendly than the Latinate ‘fortis’ and ‘lenis’. As an example from the vowels section, the chart (p28) mapping the glide from one vowel to another that marks a diphthong offers a clear visual representation while noting that the start and end positions will differ from the pure vowels.

The sections on articulation feel like a preliminary as the Difficulties with consonants (vowels) section gets to the heart of learners’ pronunciation problems. Transfer issues from a number of languages are invoked to illustrate points. For example, Preston (p16) describes Spanish speakers’ confusion between /v/ and /b/: they do not have a /v/ sound, their nearest equivalent is a bilabial fricative, so they tend to substitute /b/ for /v/ as in bery [very] big. Preston suggests three viable strategies: drilling high-frequency words containing /v/; visualising the whole word before pronouncing it; what he calls a ‘visual mnemonic’, an image of the v shape made by the upper teeth as they meet the bottom lip. At a recent IATEFL event in Dublin, Preston demonstrated the visual mnemonic on a whiteboard and it certainly captured the audience’s attention. EP is not an activity book per se but the tips and techniques provided are frequently inspiring. For instance, the role play (p35) to practise voiceless/ voiced final consonants (price/prize) is fun and genuinely valuable.

Less space is allocated to suprasegmentals, as seems traditional in books dedicated to pronunciation and in pronunciation exercises as part of coursebooks. The lack of coverage means inevitably that there is a degree of generalisation, for example ‘[s]poken English is stresstimed’ (p37), i.e. there is an even beat falling on stressed syllables. Yet research by Cauldwell (2013) among others has emphatically shown that English rhythm is far from isochronic. Given the complexities of intonation – Cauldwell (ibid) debunks the notion of associating tones with meaning or syntactical patterns – three pages seems scant. The observation (p43) that discourse determines pitch movement, with ‘new’ information signalled by a falling tone and ‘old/ known’ information by a rise, is useful, as is the suggestion for a storytelling activity which follows (p44), but the section is not developed enough to fully satisfy teachers new to this area.

For those wanting fuller information or classroom activities, the one-page bibliography at the end of EP is judiciously chosen. It includes classics by Gimson, Roach and Underhill, as well as others that deserve a lot more acclaim in ELT, such as the brilliantly innovative Rhymes and Rhythm by Vaughan-Rees (see my review in MET 22/4) and the very sensible and pedagogically-orientated textbook of Parker & Graham (2002). It is a shame that Gilbert’s Clear Speech (2012) is missing, especially as EP has done plenty of justice to American English (e.g. the vowel chart on p25), but choices obviously had to be made to contain the reading to a single page. Throughout, Preston stresses that pronunciation teaching must be integrated into a teacher’s long term professional development, in which case the bibliography is a good starting point.

In short (a very apt phrase for this booklet), EP is an economical, and economic, way of giving new and not so - new teachers the essentials to feel comfortable dealing with their students’ pronunciation needs. The fact that the booklet literally fits into your pocket means that you can keep it to hand for on-the-spot classroom reference or moments of leisure when you really want to know what a glottal stop is (p12) or why your Russian learners tend to put too much weight on the second element of a diphthong (p33). Don’t be put off by its size, EP definitely punches above its weight.