Heads Up 1 and 2: Spoken English for Business 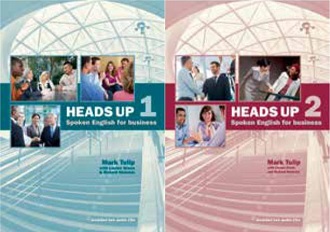 During the 2016 Olympics in Rio de Janeiro, there was quite a lot of muttering about the poor crowds at many events: not the booing of athletes who were competing against Brazilians, but the low in-stadium attendance. But there is something about watching the heats for the discus and hammer throw that doesn’t quite compete in adrenalin terms with fast events where all the finalists go at it hell for leather over 100, 200 or 400 metres. Compared to most other ELT material, Heads Up is a 100-metre sprint, with each double-page unit/spread building up to (or building down from, but more on that later) an output task. At 60 minutes per unit (as they say on the back cover) that’s 40 units in 40 hours. Got your stopwatches ready?

Heads Up 1 is CEF A2 to B1, and Heads Up 2 is B1 to B2. To be sure, they aren’t actually stating that a learner can pole vault from A2 to B2 in 80 hours, which is wise, and something of a relief, since we wouldn’t really want our learners to learn that fast, would we? The entire profession would be out of work in six months. But let’s look at this Usain Bolt of ELT publishing in a bit more detail.

Units have five to seven parts culminating in one reasonably substantial (for the level) task. On the way, in every spread, there’s an initial speaking activity, then a short listening section, input called Key language in the form of a longish list of phrases to use, a very well-chosen pronunciation spot (putting most other Business English titles to shame), a section called Get ready which gives us some high-speed controlled practice of the input, and then we do the task. As you would expect from the title, there are no reading or writing activities. Perhaps one hour is on the optimistic side for going through all these stages, especially with the exploration that inevitably comes up in one-to-one and small group classes, which is surely where these books are aimed.

Of the 40 units, the first 14 (15 in Book 2) are called My Job, the next 18 (16 in book 2) are called My Business, and the final seven or nine are called The Bigger Picture, which deal with larger business issues. The area of Socialising straddles both My Job and My Business, with two units in each. Interestingly, the units can be done in any order, since the language in one does not depend on or follow up the language of any other. This non-linear approach grants a huge amount of flexibility to class logistics and of course means that the learner(s) can be much more involved in selecting units to be done. There are no revision units. There are no teacher’s notes, except for a Feedback sheet at the back of the book for monitoring student performance. There is no ostensible guidance for teacher or learner. Like most material from this publisher, visual content is kept to an absolute minimum.

I think the authors have done a great job in grading the tasks, providing an exceptional balance of accessibility and challenge, though I’d have liked them to be linked to CEF ‘can-do’ statements. The sheer variety of these output tasks (aka the final P in the days of PPP) is impressive, and I have the impression that the authors have back-planned from this: What do they need to be able to do this task? Let’s input that and only that. It’s an approach that’s close to my heart.

The thing that will stun many users of Heads Up is the complete absence of any kind of grammar syllabus. Yes, there is input, and most of it is at the phrase/ chunk level, so what you get is a kind of series of phrasebook expressions that may be quite tough to memorise or generalise. It strikes me as being an example of what Scott Thornbury memorably dubbed ‘All chunks and no pineapple’. Sidestepping the entire cluster of grammatical items that learners of this level struggle to master is a brave move, which is why it is difficult to use Heads Up as a stand-alone course. If you’ll allow me to thrash the Olympics metaphor a little more, it’s as if grammar had been disqualified from attending due to some massive, long-standing doping scandal; to be sure, maybe previous generations of learners were to some extent hooked on grammar, and it could be argued that the exclusion of a self-proclaimed grammar section is appropriate in an oral skills book.

But am I exaggerating when I say that a focus on form as such is completely absent? Certainly nothing is signposted as Grammar, but the rubric for Get Ready page 7 of Heads Up 2 begins: ‘If a verb follows a preposition, the -ing form is used (e.g. He’s in charge of buying). Choose the correct form of the verb in each of these sentences.’ What follows is a controlled practice exercise with six sentences in which the learner chooses between an -ing form and an infinitive (the unnamed alternative). However, in two of the sentences getting the right answer depends on the learner knowing that the preposition to is not always what it seems; one answer involves a have to, another is a have got to, and there’s a fiddly ‘The main purpose of my job is to improve / improving the effectiveness of our machinery on the production line.’ Clearly, the first option is the desired one, but you would be hard put to say that substituting the gerund for the infinitive sounds unnatural or unacceptable to the native speaker, and among native or non-native users incomprehension is unlikely to result.

Looking at the spread on trends – describing change in figures in Heads Up 1, there’s some fine, very well contextualised lexis (decreased, went down, increased, went up, etc.), and prepositions (on average, from $100k to $150k, etc.), and the task requires the learner to ‘… describe trends from your work in recent years …’, but as soon as we’re linking with now, we’re going to need the present perfect when all we’ve practised is the past simple. The way these tenses relate in terms of meaning and time adverbials is not something we can skip. Similarly, Unit 15 of Heads Up 2 gives us ten useful questions for talking about education and career, three in present simple, five past simple, one present perfect and one future; three are Yes/No and seven are Wh- type; seven use an auxiliary do in some form. Any A2 learner is going to need a bit of time to get their head around this grammar in order to be able to produce anything more ambitious than one-word answers. Having said that, one area in which I think the unanalysed phrasebook approach is on stronger ground is Telephoning, as in Unit 3 of Heads Up 1, which wisely restricts itself to control language. For me, these exponents do simply need to come out as whole chunks of survival language.

In many Key Language sections, lexical chunks and phrasal verbs, which to be fair are spot-on for the theme, are simply presented to the learner as lists, with no apparent work on meaning, e.g. page 8 of Heads Up 2 gives us (among others): to get stuck in traffic, set off on a trip/ journey, to be delayed / held up in traffic, to pick somebody up / drop somebody off at the airport, and so on. As input it’s appropriate, and the following section asks the learner to manipulate the input filling the gaps in the sentences and ‘… use the correct form of the phrasal verbs’, but hang on, we haven’t yet had a chance to get to grips with the meaning, very much throwing the learner in at the deep end. Unit 25 of Heads Up 2 gives us no fewer than 28 exponents for participating in discussions. If I think of the languages in which I’m more or less at that level, I’d probably feel a bit overwhelmed by the equivalent of that.

One of the strongest aspects of bare bones material like Heads Up is that any factoids you get tend to be memorable: page 85 (Activity Files) of Heads Up 1 tells us that the average FB user has 130 friends. I’m getting close to that number though I admit I really don’t know who some of those people are; and that the average number of photos uploaded per day is 250. Can that possibly be per user? If it is, I’m missing out on a major contemporary life experience. Maybe that’s why there are so many empty seats in stadiums during major sporting events. These two titles do a better job than most at the level at creating interest and providing engaging tasks. If you’re looking for an immediate communicative payoff, you could do no better. But just like your teachers used to say about packed lunches the day before a school excursion, remember to take your own grammar with you.