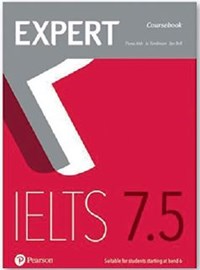 I recently picked up some friends who had just flown on what is, at the time of writing, the world’s longest non-stop flight, between Auckland and Qatar. At seventeen and a half hours, it’s a mighty long haul, much like Pearson’s Expert IELTS 7.5, which weighs in at a hefty 214 pages, and that’s just the coursebook. There’s also a Student’s Resource Book (SRB), contributing another 139 pages, with ten pages of additional practice to consolidate language input and test-taking skills. The aim is to take IELTS students from a respectable 6.0 level (top end of B2) to 7.5 (top end of C1), which where I work in Spain is usually a 180–220-hour trip, and I reckon there are about 220 hours of work in this coursebook even without the SRB, so fasten your seatbelts, forget the cirrocumulus outside and get ready to put in some hard work. And if you’re coming in at a 6.0 level, you’ll find the take-off pretty steep, as the material in Module 1 doesn’t seem to be any lower pitched than that in Module 10.

Expert IELTS, like the exam, is adult-content and expects punters to be articulate: the lead-in for one listening section asks ‘What do you think is the most important medical advance in history?’ Um … the development of antibiotics, germ theory, birth control, anaesthetics, realising that we are not made up of four humours and the best treatment for any malady is to use leeches, or getting Hugh Laurie to play Doctor House? And the reading sections will expect you to take lines like: ‘Our ability to imbue things with rich meaning is a universal human trait that emerges early in life and develops as we age’ in your stride. Well fair enough, since most IELTS candidates are looking to pursue university-level studies in English (the Academic version) and those going for the exam for migration purposes (General Training, with some differences in the Reading and Writing components only) are perhaps less likely to need to cope with understanding and producing this level of discourse.

The coursebook has ten modules of 14 pages, which is going to account for quite a lot of class time, though of course some of it could be done as self-study. Module titles don’t try to be funny or enigmatic: Consumer Society, Social Networks, Law and Order, the Feelgood Factor, etc. These are divided into A and B halves that are thematically related, e.g. A community and B communication, A the mind and B the body, A preventing crime and B solving crime, etc. Both A and B walk us through all the sections, though not all the parts, of the exam. I might have gone for shorter modules with slightly wider thematic range. Nevertheless, while it avoids any topics that might quicken the pulse of your learners, it still manages to be pretty interesting. And the modules are full of analysis and reflection (‘What helped you identify and choose the correct option?’) and as much post-reading personalisation as you could hope for (‘Would you describe yourself more as a rational or creative person?’). Writing sections will send you to look at the descriptors for assessment criteria before the planning stage; this has been thought through well.

Apart from heaps of practice of the four papers, there are sizeable sections on Language development and Vocabulary. Of course, only in the two output parts of the test can candidates display (and I use the verb consciously) their acquisition of this language, something they sometimes forget in the Speaking part, where just answering the questions politely isn’t enough to get much beyond a 6-band. If they can take in and appropriately use just half of what’s in these two books, they’ll be flying into the heady 8 band, and Writing part 2 is probably the ideal stage for them to show that. Each module finishes with a packed one-page review. Thorough, or what?

Pronunciation gets a mention in three of the modules, though I found it somewhat tokenistic: tiny sections on weak forms, the schwa and connected speech. To be sure, any advanced course that has got its head around the notion that learners at this level have not necessarily mastered the phonemic system of the language deserves some credit, but the Speaking Assessment Criteria faithfully reproduced on page 183 remind us that Pronunciation ranks equally with Grammar, Lexis and Fluency. Poor old pron, forever below the salt. Except when we test. Or try to understand each other. I see a corollary here with punctuation; it bears a relationship with writing like that of pronunciation in speech, and it too seldom gets the attention it deserves. It puts in a cameo appearance on page 180, but I’d like to have seen it less simply assumed as we move though the otherwise excellent Writing work.

While we’re in among the ‘end matter’, it’s worth mentioning that this includes eight pages of down-to-earth test strategies (which could arguably have come at the beginning), six further pages of grammar summaries, eight very comprehensive video-accompanied pages to guide you through the Speaking test. In the poetically-named Interlocutor Frame of Part 1, candidates are likely to be asked if they are working or studying. In my experience of examining, perhaps as many as 10% of candidates are neither; it has escaped the attention of IELTS Speaking Test devisers that much of the world has been going through a recession these past nine years and that millions of people have found themselves unemployed. I’ve also had housewives who neither work nor study, but who wish to settle in an Englishspeaking country. The exam rubric question itself needs to be more inclusive and the coursebook should provide a face-saving formula for those who could feel excluded or even snubbed by a question that comes in the very first minute of the interview. Finally, there is an excellent analysis of the ten most common task types in the two writing questions, with a clear indication of the importance of the Overview in Task 1, without which you cannot get more than a 5 band on Task Achievement. That can have a devastating impact when the rest of your scores are up in the sevens. It is also vital not to interpret or express opinions about what might lie behind the data; the inclusion of irrelevant material is penalised. Task 2 on the other hand is slightly more permissive to waffling. The descriptors for bands 6–9 are included for both tasks, but as the painters of medieval diptychs of scenes of the Last Judgement knew, if you show them Heaven, you also have to show them Hell. That is my case for showing a fuller range of Assessment Criteria. As is standard, the very last few pages reproduce the audio scripts.

Visually the coursebook is on the austere side, with quite full pages and usually only one small colour photo per spread, in line with the seriousness of the contents. Indeed, the book never lets the exam itself out of its crosshairs for long, which runs the risk of ending up rather dull but to my mind this one never does. We’re here to work hard, the book promises, and it delivers. True, there are small gapfill exercises with the vocab input, which are not a feature of the exam, but they’re there because – like walnuts – they’re good for you.

Like a faithful disciple, the Student’s Resource Book follows the steps of the Coursebook in terms of content and format, and with ten pages per unit really almost stands alone, or could supplement a different course, so if I were to play devil’s advocate for a moment I might wonder why they even went to the trouble of producing it. It’s very good, but will we have time for it? And that’s before we even factor in MyEnglishLab with its additional material and tests, the Practice Tests Plus component, the Teacher’s Resource book and Teacher’s online material. If you’re gasping for breath at this stage, you may not be alone.

All in all (to use a connector beloved of IELTS markers), this is an exhaustively complete package, but more than that, looking at the amount of language input and building it provides, as well as the inherent interest of many of the topics, much of the material could successfully permeate into general English or CAE/ CPE classes, business English classes. It is one of the most successful advanced course packages per se that I’ve seen.