James Pointon reviews Is That Clear? Effective communication in a multilingual world by Zanne Gaynor and Kathryn Alevizos.

Is That Clear? Effective communication in a multilingual world 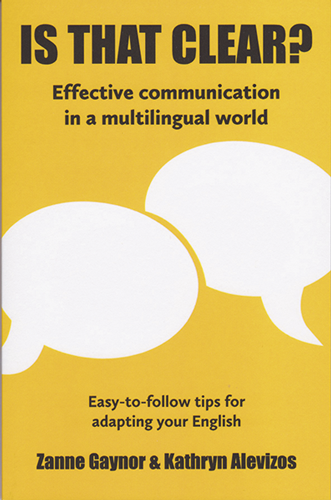 With English being widely recognised as the international language of business – though Brexit may have dented, if not entirely put paid to, that idea – a lot of time and effort is expended on helping non-native speakers of English to survive in an English-medium business environment. General business English coursebooks abound, and many ELT publishers also produce ranges of single-issue supplementary texts on the ‘Big Four’ of Meetings, Negotiations, Presentations and Socialising – all geared towards helping non-native speakers to be able to participate in the ‘English’ way of doing things, despite the fact that there are now four times as many non-native speakers of English as there are native speakers, and the chances are that most business transactions conducted in English around the world do not now involve a native speaker of the language at all.

There are also, of course, books on the market for English speakers, aimed at helping them to do business more successfully with people from other cultures. These, however, tend to focus on sweeping generalisations about how acceptable/unacceptable it is to arrive late for a meeting in a particular country, what it means if your Japanese host offers you another cup of tea every time you try to bring your negotiation to a conclusion, or why it is so difficult in some countries to get a straight yes or no answer to a simple business proposition. Most of these books adopt a ‘this is what to expect’ tone, with the slight implication that the behaviour of the non-English speaking party is in some way faulty and something that needs to be understood and overcome, if not actually pitied. Few, if any, take the bold step of suggesting that modifications to the behaviour and language of the native speaker of English in a cross-cultural situation would be a good idea and might make things progress more smoothly for all concerned.

Enter Is That Clear? – a very small book that packs a big punch. The book has some timely home truths for speakers of English wishing to work or socialise with people from other countries who do not speak English as their first language. It points out, in the nicest possible way, that English speakers tend to pepper their language with incomprehensible phrasal verbs, filler words that have no meaning beyond playing for time and avoiding gaps in the conversation, unfathomable – if colourful – idioms, and polite but impenetrable circumlocutions, all delivered at breakneck speed, with the words sliding into one another and half the consonants missed out. Is it any wonder that non-native speakers have so much trouble understanding us? But help is at hand. In three chapters (with subdivisions allowing for many individual topics to be examined), the authors offer a series of clear and concise explanations of the various problems, together with tips and activities to persuade and help native speakers – not just those in business contexts – to adapt their English and make life easier for everyone.

I am no believer in dumbing anything down, and I decry the current trend to aim always for the lowest common denominator, so I am relieved to see that the authors don’t want to reduce English to the bare bones of a merely transactional language and rob it of its intricacies, richness and subtlety when it is employed in general use. I can, however, appreciate why there is a need for a book of this kind for specific situations, where English speakers need to be encouraged to make the modifications that will help non-native speakers cope.

But will the book sell? It certainly comes with celebrity endorsements – David Crystal, Jennifer Jenkins and Baroness Jean Coussins have all written in praise of it – but they are, to some extent, the converted, who need no preaching to. I hope that it finds a home in the back pocket of those people who do need a little guidance in modifying their language for the benefit of others. However, I suspect that, unfortunately, the people who need it most are the people least likely to recognise that need.