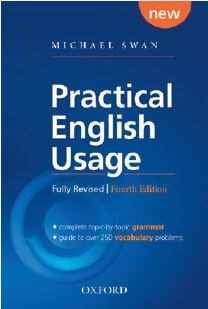 Practical English Usage is a title which needs little introduction. Now in its fourth edition it has long been the go-to book for students and teachers struggling to get to grips with the trickier grammar points.

So how has such a popular title been improved since the third edition in 2005? The biggest change is in the format. The previous edition listed English usage areas alphabetically, so not only was followed by noun + complement and slang by small vs. little. Now the book is divided into two components, grammar and then vocabulary. The grammar is split into 28 sections, each section covering a traditional unit of grammar. After dealing with specific topics, such as telling the time, and word formation and spelling, most of the Vocabulary component deals with problem words, such as how to say 0 and the difference between classic and classical.

I find this new organisation an improvement as it’s easier to locate what you need. I put this to the test by trying to find some random language points. The first was ‘tag questions’. I found questions: basic rules in entry 216 and was directed to question tags in entries 305 and 316. Next, I searched for the correlative comparative. I couldn’t find it under articles but I quickly found it under using comparatives and superlatives. For a vocabulary item, I looked up economic vs. economical and immediately found the entry without needing the index. In short, students and teachers unfamiliar with this title will find navigation straightforward. I should point out that there is an online version of this book available, which I suspect makes information retrieval even easier.

A feature I found useful in the third edition was a listing of 130 common mistakes referenced to the relevant entries. This has been expanded by inserting a list of typical errors before each grammar or vocabulary section. Thus, before the section on pronouns, you can see mistakes such as Let’s go and ask the old one for advice and She took her dog with herself indexed to the entry giving the explanation (one refers back; after a preposition of place, use a personal not reflexive pronoun). Going through some of these error sections in class would be a useful diagnostic exercise. (Incidentally, the online version includes diagnostic tests, a feature which it would be nice to see in print.) Students working independently could also use these typical errors to get feedback on what they need to work on.

The grammar of a language changes a lot less than the vocabulary and obviously most of the content does not need to be changed from the 2005 edition. Thus, the entry for going to remains exactly the same, including the example sentences, although, curiously, going to comes before will this time round, although Swan notes that ‘[w] ill is the basic structure for talking about the future’. Perhaps this new ordering reflects the fact that students tend to overuse will for anything connected with the future and would benefit from seeing common alternatives first. As an example of an updated vocabulary point, under city and town, Swan adds that ‘the two words can be used more or less interchangeably in American English’ – my guess is that the same is pretty much true in British English these days. Look in the British National Corpus and you’ll find town applied to places properly deemed cities, like London and Manchester.

For those interested in the evolution of the language, the entry changes in English will be fascinating. Interesting points made here include: the progressive use of traditional state verbs (I’m loving it); the disappearance of auxiliaries in fast speech, Where you been?, which is said to perhaps signal a restructuring of the verb phrase in speaking and even eventually writing; the American-inspired use of the past simple with just and already; two-syllable adjectives forming comparatives and superlatives periphrastically ‘Common used to be commoner but more common is now more common.’ (!!) This is a descriptive grammar and while Swan is not suggesting we teach students these new or alternative forms, students should be informed of that brave new world outside the classroom.

The best reason to consult Practical English Usage of course is the quality of the explanations. Describing English in English is never easy but Swan has got it down to such a fine art that this is really the first port of call when you are wondering how to present a language point. For example, the entries on articles, a nightmare area for those who don’t have them in their own language, flow beautifully from basic information, the = ‘You know which I mean’, to advanced points such as the zero article with binominals (arm in arm, with hat and coat). The examples represent the meaning and form succinctly with vocabulary that matches the level of English usually associated with that grammar point.

If you have an older copy, you will want to update to this edition because of the more convenient format and the confidence that comes from knowing that the entire content has been revised in the light of what is happening in the language today. It is difficult to predict what will happen in English – will the tendency to use the humble hyphen in compound nouns continue to decline? – but I’m convinced Practical English Usage will remain indispensable.

Wayne Rimmer is a freelance teacher, trainer and materials writer, recently contributing to the Cambridge Empower series of coursebooks.