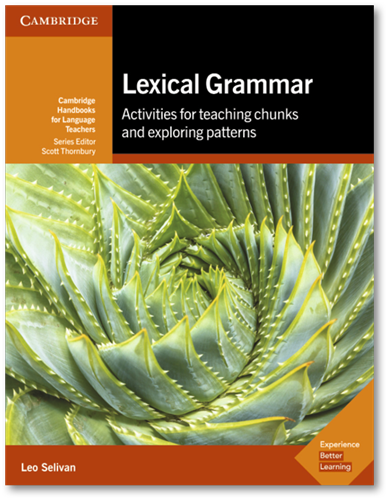 In this book, sub-titled ‘Activities for teaching chunks and exploring patterns’, the author settles on ‘chunk’ as a user-friendly superordinate term for ‘lexical phrases’, ‘ready-made utterances’, etc. – apparently, over 40 different terms have been used to refer to such items! – and proposes the following definition, based on the perspective of a learner of a language rather than, as is more common, that of a native speaker: ‘A chunk is a frequently occurring, meaningful string of two or more words – either fixed or with variable slots – which can be learned as a single unit, without the need to analyse its elements. Once committed to (long-term) memory, a chunk can be retrieved and used ‘as is’ or with modifications, if necessary, bypassing the need to generate it from individual words and grammatical rules.’ (p13)

The wording ‘can be learned’ (my emphasis) is significant. Some chunks typically are learned as single units in this way. For example, one of the first chunks anyone learns in English is ‘Thank you’. If you analyse this chunk, it turns out to be an extremely anomalous construction: a verb with an object but no subject. But no one ever needs to make this analysis.

One of the theses of this book is that not only collocations, discourse markers, social formulae, sentence frames and idioms, but also many grammatical elements of English can be learned in the same way, including ‘problematic structures’ such as do-auxiliaries, third-person -s, present perfect, uses of prepositions and reported speech. For example, a beginner might initially learn ‘What’s your name?’ as a fixed chunk, and later reconceptualise it as a pattern – ‘What’s your [noun]?’ – and, separately, discover that ‘what’s’ represents ‘what + is’.

The book’s 11-page Introduction is a useful, concise overview of what chunks are, and the significance they have not only in promoting fluency and idiomaticity in expression and efficient processing in reading and listening, but also in facilitating language acquisition, including the acquisition of grammar: learners can use memorised chunks – including chunks which are way ‘above their level’ in terms of grammar-based coursebooks and syllabuses – to express themselves, but also to use as patterns, or ‘templates’, for noticing similar examples and generating further utterances of their own; grammar gradually emerges in the form of generalisations from the accumulation of these experiences. It is pointed out, however, that explicit grammar teaching still has a role to play in priming learners to notice new and partially-learned patterns.

The bulk of the book consists of 10 chapters, each with between 8 and 13 activities. (The blurb on the back cover states, rather strangely, that there are ‘over 95’ activities; in fact, there are 98.)

Each activity has a brief outline (e.g. ‘Learners use an online dictionary of collocations to identify collocates for a key adjective’), notes on level, time and preparation, a step-by-step procedure with sample material, classroom management tips, suggestions for follow-up and variations, cross-references to other activities (in some cases) and a rationale, which in many cases refers to supporting research and theory. The book also has a Glossary and a list of useful resources.

The activities in Chapter 1 ‘Defining and identifying chunks’ make use of texts and online reference resources to foster recognition of chunks and the habit of recording them and manipulating them, for example, in activity 1.4, by inventing stories.

Chapter 2 ‘Revising and recycling chunks’ suggests varied ways in which learners can be given the all-important opportunity to meet chunks repeatedly and to use and process them in different ways.

Chapter 3 ‘Exploring text’ proposes way of exploiting texts – including the recycling of previously-used texts – to focus not on the semantic content (reading comprehension and reading skills) but on the language that constitutes a text, beyond the familiar practice of giving attention to ‘difficult vocabulary’. For example, in activity 3.1 learners are asked to predict what grammar, rather than what vocabulary, will be in a text before they read it.

The focus of Chapter 4 ‘Chunks and listening’ is on bottom-up listening strategies for noticing chunks, including their stress patterns and intonation, and some of the features of ‘connected speech’.

Chapter 5 ‘From words to grammar’ gives a grammatical twist to activities traditionally used for teaching vocabulary and shows how such activities can be applied, for example, to morphology, word class, collocation, colligation, verb aspect, passive voice and ergative verbs.

Chapter 6 ‘From grammar to words’ has a more explicit grammatical focus, and shows how grammatical aims can be approached from a lexical starting point or given an added lexical perspective.

Chapter 7 ‘Problematic structures’ shows how many of learners’ difficulties with grammar can be addressed by focusing on a small number of frequent, prototypical exemplars

Chapter 8 ‘Chunks in writing’ extends the range of already-familiar activities for noticing and using typical chunks in writing texts of various genres.

Chapter 9 ‘Adapting old classics’ provides examples of how a lot of familiar, tried-and-tested activities such as ‘Find someone who …’, role plays with role cards, matching words and definitions and PictionaryTM can be given a new lexico-grammatical slant.

The activities in Chapter 10 ‘Loving language’ encourage learners to explore – and have fun with – the complexity of English, and to consider how it differs from their L1. The activities include deliberate use of spoonerisms and miscollocations to promote noticing, and working with irreversible binomials, alliterative chunks, polysemy and chanting.

The activities are varied and involve a great deal of interaction, collaboration, movement around the classroom and, in many cases, an element of playfulness. Many of them require the classroom to have a projector and internet connection, but in some cases alternatives are suggested if this is not possible.

Perhaps, ultimately, the most important aspect of activities such as those described in this book is that they foster the development of habits of noticing, recording and recycling chunks and patterns, and making judicious use of reference sources, which will promote learners’ autonomy and help them to make the best use of the English they encounter in their daily lives and work.

Lexical Grammar is a rich resource for teachers, providing a wide range of practical classroom activities as well as food for thought about language, learning and teaching, and is a worthy companion to previous books such as Davis & Kryszewska (2012), Dellar & Walkley (2016) and Lindstromberg & Boers (2008).