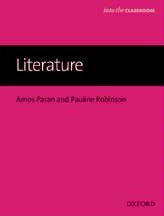 In educational contexts where literature is a curriculum subject, poetry, prose fiction and drama are objects of study. In the language classroom, literary texts may be used to mine examples of language, or to give learners the opportunity for an authentic reading experience and response to the text as readers. Rather than opting for any one of these approaches, the authors of Literature acknowledge that the aim of teachers using their book ‘may be to work on the learners’ linguistic improvement, or to broaden and deepen their understanding and knowledge of literature in English, or […] to help with learners’ personal development’ (p11). Ambitiously, yet with a light touch, they have produced a handbook for teachers using literature in any or all of these ways. The book is neither an academic introduction to literary genres nor simply a ‘recipe book’ of classroom activities. But teachers with little or no background in literary studies will be supported by commentary that provides them with ways of introducing students to key aspects of reading literature, as well as rich and varied examples of motivating classroom activities.

Of the handful of books on literature in language teaching, those still in print were almost all published in the last two decades of the 20th century. This new edition has two major advantages: the inclusion of 21st century texts and reference to the wide range of resources available online, including supplementary resources for the book itself.

The book is divided into three parts: Establishing the Groundwork, Working with Literary Genres, and Working with Related Genres. Although the first part focuses on key principles, the authors have chosen not to start with a dense theoretical introduction and then provide a compendium of discrete practical activities. Theoretical background, rationale and practical classroom activities are closely integrated throughout all three parts of the book.

The challenge for a handbook of this kind (as on most teacher development courses) is always to present sample activities which are examples of good practice, but which will be seen as examples and will inspire teachers to transfer the ideas driving the activities to other texts and contexts. Paran and Robinson have devised a way of organising and presenting their material that should encourage teachers to adapt and apply their approaches beyond the pages of their book. Rationale, methodological guidance and suggestions for further classroom activities are all interspersed throughout the book, set apart with boxing or shading, and clearly signposted with margin headings and icons. Theoretical underpinning (Why this works) is restricted to single clear concepts and related to particular sample texts/activities. Teaching tips (Getting it right) go beyond classroom techniques, providing advice on how to manage the relationship between teacher, text and learner and how to stimulate student response. And further teaching ideas (Try this) add breadth and variety to the example texts that are given extensive treatment.

The ‘groundwork’ covered in the first part of the book is concerned with general principles, including the value of literature in the language classroom, ways of involving students creatively in what they read, and what they bring – or can bring – to a text. The authors’ eloquent justification for the place of literature in language learning is worth quoting:

‘Literature […] is part of human experience and using literature in our language teaching does not take away from our learners’ language learning.

Rather, it builds connections that are made elsewhere in our learners’ future professions; it enriches their learning; and it also increases their knowledge of an important part of the culture of English-speaking countries.’ (p14)

The tricky question of what constitutes literature and where to draw the line between the literary and the non-literary is deftly addressed by contrasting the poetic effects exploited in many advertisements with the well-known test case of the apparently unpoetic This Is Just To Say (1934) by William Carlos Williams:

This Is Just To Say

Forgive me
they were delicious
so sweet
and so cold

The authors make a clear case for the poetic quality of the poem by pointing to the effect achieved by the poet’s choice of particular words, the way that the sounds of these words operate on the reader and the way that lines and words are placed on the page. The nature of ‘literariness’ is reinforced by further comparisons of descriptions from Dickens and Hardy with the description of an interviewee in a newspaper feature. And dramatic dialogue is contrasted with natural conversational discourse with reference to seven functions of language derived from, though not attributed to, Roman Jakobson. Indeed, the only theorist directly cited in the book is Louise Rosenblatt, for her very useful distinction between efferent and aesthetic readings of literature, i.e. literature as a source of knowledge (about literary from as well as content) that can be taken away from a text, contrasted with the immersive personal engagement that readers can feel with poems that ‘speak’ to them or novels and plays that create a world they feel they inhabit.

The section entitled Approaches and techniques focuses on ways of eliciting reader response and sensitising learners to key themes. The idea that it is the teacher’s role to stimulate, elicit, provide prompts and signposts – in short to create the conditions in which learners develop their own insights and ultimately their own tastes as readers of literature – is a constant theme throughout the book. The first priority is to give learners the opportunity to enjoy and respond to the text, only then enriching their experience with aspects of literary knowledge or attention to linguistic effects. But the guiding principle is always discovery.

For example, in the section on What readers bring to a text, the authors suggest learner-centred research tasks to bring to the classroom the background knowledge of the Russian Revolution needed to make Animal Farm fully meaningful, or familiarity with the biblical account of Abraham’s near-sacrifice of his son that is required to appreciate Wilfred Owen’s poem The Parable of the Old Man and the Young.

The second part of the book deals in turn with the four major literary genres: short stories, poetry, novels and drama. Again, activities around sample texts are complemented by plenty of Try this suggestions for further activities, as well as by reference to other texts that should direct teachers beyond the particular examples in the book and encourage them to try out the practical ideas more independently. The chapter on the novel, for example, signposts a number of novels, not dealt with in any detail in the book, but which teachers might find it useful to explore.

Readers looking casually through the book may note the absence of any long prose texts, even when a complete short story is being dealt with. Closer inspection will reveal a number of references to the ‘extra resources’ accessible via the Oxford Teachers’ Club on the OUP website, which are mainly the prose texts treated in some detail in the book (the Abraham and Isaac passage from Genesis and complete texts of short stories by Ambrose Bierce, Kate Chopin and Susan Hill).

The final part of the book consists of two chapters on Literature and Film and Literature, Art and Music. Both are valuable reminders of the teaching and learning potential of transmedia connections: film adaptations of novels and short stories, bringing dramatic performance into the classroom, poetry and prose that respond to music and works of art, the use of graphic novels. The inclusion of ways in which literature influences and is influenced by other art forms and media is a welcome extension that reflects the practice of many teachers.

Perhaps the most distinctive aspect of the book is its ‘voice’: the authors have found a way of addressing the teacher-reader that takes nothing for granted in terms of knowledge of or experience in using literature but makes everything feel accessible. There is a consistency of tone and a ‘narrative’ flow to the linking commentary that makes it particularly satisfying to read. The book lacks a bibliography, which might have been helpful for readers wanting to explore ideas further, although it does include quite a useful webliography. But this is a minor quibble: Literature speaks directly and informatively to its readers, providing ideas, examples and resources that will encourage teachers considering using literature in the classroom for the first time and provide teachers already using literature with a wealth of new ideas.

Alan Pulverness works for the Norwich Institute for Language Education