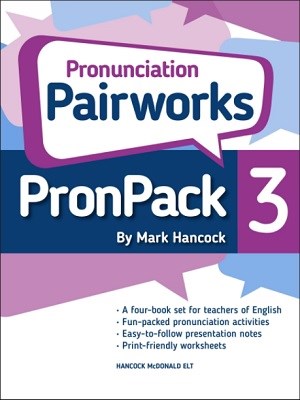 My favourite Nina Simone song is Don’t let me be misunderstood, a prophetic title, given the singer’s fractious relationship with almost everyone she came into contact with, but for the people we deal with in our profession, probably the best way of being misunderstood – or simply not understood, which is not exactly the same thing – lies in the way they articulate the phonological system of the language, which is no less important than the grammatical or lexical systems. Yet pronunciation continues to be the Cinderella skill, frequently downplayed after A2 level, or even given up on in much classroom practice as teachers, especially those in monolingual teaching situations, become inured to their students’ meta-phonology. Often though, the pragmatic issue for teachers is the how, when and how much of in-class pron work, and of course how to make it motivating and enjoyable. True, there is some very good material out there, such as The Book of Pronunciation (Delta 2012) by Jonathan Marks and Tim Bowen, the student-friendly English Pronunciation in Use (CUP 2003) by Mark Hancock, and Adrian Underhill’s more discovery-based/teacher-friendly Sound Foundations (Macmillan, 1994; 2005), not to mention some well integrated pron work in General English coursebooks; the English File series inevitably springs to mind. Business English coursebooks, on the other hand, unwisely tend to treat it as optional, like a multi-floor hotel without a lift. Let us not forget that Pronunciation is worth 25% of the IELTS Speaking mark and in Cambridge First (FCE) Speaking is worth as much as Grammar and Vocabulary combined. So what sets this new pack of four slimline (60 pages each) books apart, and why should you order it for your teachers’ room today?

First of all, Hancock’s approach is strikingly innovative. For many years I’ve thought that an ELT classroom without a pron chart on the wall is naked. A pron chart or the pron chart? Well, Hancock has reconceptualised our pron chart brilliantly, using a hexagram to show the 19 vowels in standard UK and US English (Workouts Book, pp13–19), with an outer ring showing the long vowels and diphthongs, below which on the same pages are domino-like rectangles showing the consonants with open gates – for want of a better expression – between the voiced and unvoiced equivalents, /p/ and /b/, /f/ and /v/, etc. The stop consonants are placed together, the glottals, the friction consonants (fricatives), and so on. Rhotic and non-rhotic varieties are given equal prominence. If you’re scratching your chin by now, then you need to get this series of four books. And yes, you probably will need all of them. They’re reasonably self-explanatory once you’ve read the Intro in Book 1, and absolutely ready to use. At www.pronpack.com there’s more information and free downloads.

The four books are: Workouts (extended drills focusing on specific aspects of pron), Puzzles (game-like activities such as mazes, sudoku, word searches and crosswords to be done in pairs, groups or individually), Pairworks (information gap activities), and Poems (rhymes, chants, limericks and raps). All the pages (or worksheets) are designed for easy projecting and/or photocopying. Each is designed to provide 15–20 minutes of classroom work, though logical combinations of pages over the entire series are signposted. Could they have put all the material into one larger pack? I’m not sure why they didn’t, as there is duplication in the front-matter. Level? Well, what level is good pron? Any learner above elementary level will cope well with the rubric. Age? There’s no reason why this material couldn’t be used with adolescents too; many pages could also be used with young learners.

Moving on to look at the four parts one by one, book 1 – Workouts – covers familiarisation with sounds, the gym workout part and finally the relationship between spelling and sounds. In this latter section I’d like to have seen a bit more on rising and falling, on the idea of completeness and incompleteness and the overarching tonic shifts; the bigger picture. Workouts makes no bones about being a series of drills to help you get your tongue around the sounds of English. In fact, it’s not just the tongue, is it? Something that has been downplayed for a long time is that there is a certain way that you need to arrange your full set of vocal equipment to articulate a given language. Drop the tongue a millimetre and you have a different sound. Bring the teeth a millimetre closer or play it through your nose, and you have another. I’ve read that Bulgarian spies during the Cold War were trained to sound convincingly like native English speakers by having cotton wool stuffed into certain parts of their mouth, and a Polish friend of mine (not a spy, I like to think) confirmed that at her university in Warsaw in the early 80s she was also put through the cotton wool treatment. The Stop and Friction Consonant Workouts (sections 1.7 and 1.8) tackle this head-on, with diagrams in a way that is eminently practical and clear. Without the cotton balls, though.

The second book, Puzzles, has an original idea called Puzzle Parquet where the focus is on word-building by means of prefixes and suffixes (some collateral learning going on here already, and a clear wink at the word formation section of the Reading and Use of English paper in Cambridge First), as well as on the pronunciation of these multi-syllable words. The game involves guessing how to form the adjective of, for example, economist or art, or the noun form corresponding to physical or biological. Other sections in the Puzzles book look at primary stress in tone units through jigsaws, stress mazes where the learner can only go through a ‘room’ if the word has the same stress pattern that is written to the left of the maze, bearing in mind that 90% of two-syllable nouns are stressed on the first, and that 60% of two-syllable verbs are stressed on the second. Inside Out is a kind of maze that you navigate through by recognising for example which of the three possible ways the morpheme S is pronounced in the given word (think eggs/clocks/ oranges). There are also Sound Soups, Wrongly Written words, and Word Chains, all of which are cumbersome to explain but fairly self-explanatory when you see them on the page.

Book 3, Pairworks, contains perhaps the highlight of the series for me: five worksheets called Air Traffic Control. It’s a grid of Europe and North Africa, divided into 36 squares, each of which has one city marked. Rather than have latitude and longitude numbers, the map co-ordinates are minimal vowel pairs, and the instruction might be to fly from those that read dad + bed to gas + bad and then from dad + men to guess + bad, and if you haven’t been thrown off the scent by the almost identical-sounding words, you’ll have worked out that the journey goes from Lisbon to Prague, and thence to Istanbul and finally on to Stockholm. It’s clear what two vowels are being worked on here, and the other ATC pages work on other close vowels, with the Geography lesson as collateral learning. Finally, there’s one where you can put in the sounds that your students need work on. It’s awkward to describe but it’s easy to use; you and your students will get the hang of it in no time. A street maps section does the same thing with tricky consonants. The aim of Pronpack Pairworks is to successfully complete information gaps where ‘success depends on producing and understanding the target pronunciation feature’.

Book 4, Poems, contains 18 worksheets whose focus is on some aspect of sound, whether it’s combinations of words with the digraph ou (cough/doubt/sound, etc), the schwa (how many can you find in: I know an old waiter called Trevor / whose customers wait forever / He lets you grow thinner / while waiting for dinner / and says Better late than never!), consonant discrimination, simple past regular verb endings, subject and object pronouns, and heaps of chanting, rhyme and reciting. There’s even one about word stress on lexis for further education. Yes, they are all specially written for Pronpack.

When reviewing books, it’s not often that one is tempted to quote the entire front matter but tempted I am in this case. Pronpack sets out to fill a gap and it does so admirably. Sensibly, no particular or native speaker model is promoted; the aim is ‘successful, communication, not correctness’ and ‘… helping to understand and be understood’ by being ‘as widely intelligible as possible’. A friend of mine told me last week that she’d hung up on a call centre operator because she couldn’t understand his accent. She would have forgiven him slips in grammar, but pronunciation is never anything but a high stakes issue. Nina was right.