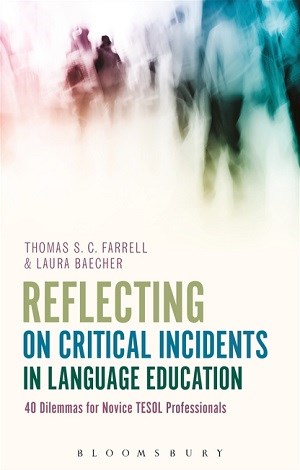 There is a massive interest in professional development in ELT and, as identified by Crandall & Christison (2016) in their overview of the area, teacher reflection, broadly understood as how teachers process the feedback they get from their teaching experiences into improved practice, is an important strand of that.

Reflecting on Critical Incidents in Language Education illustrates one tool for reflection, critical incident analysis, in multiple settings and shows its value in the ongoing process of teacher development.

A decent one-word synonym for critical incident would be ‘dilemma’.

A critical incident is anything which happens to a teacher in or out of class that is striking enough for the teacher to question pre-conceived values and beliefs.

The seriousness of the actual incident is irrelevant, only in part because this is subjective and context-bound – what seems hugely significant to one teacher may be trivial to another.

Rather, the defining feature of a critical incident is that it prompts reflection, and possibly change.

‘We view reflection as crucial to understanding the critical incidents that are presented in this book and we believe that a critical examination of such incidents can lead to a better understanding of a teacher’s practices.’

Any instructor knows that we are faced with dilemmas at almost every stage of the teaching process.

What turns these into critical incidents is the formal exercise of reflection, which as this book shows goes further than just wondering what went wrong (curiously, critical incidents are almost always negative experiences, at least as portrayed in this book).

The book targets critical incidents as seen through the lens of novice teachers on the grounds that there is often a gap between initial teacher education and the harsh realities of the classroom.

As noted by Borg (2003), the (lack of) preparation of new teachers for the brave new world of teaching is a recurrent motif in the research literature.

Two points arise from this focus on novice teachers.

First, do not think that this title is aimed at a less experienced audience: the issues raised and the general approach would inform seasoned professionals, whether teachers interested in their own development or teacher-educators looking for a fresh approach.

Second, there is no suggestion that critical incidents stop once a teacher is past a certain competence threshold.

The type of critical incident would probably change with experience but teaching is so complex that there is never a stage where performance is resistant to analysis.

The book is organised into ten chapters each presenting four critical incidents.

After reading the Introduction, where the approach is defined and justified in an accessible way, busy readers could use the chapter headings or the Index to find issues most relevant to them.

For example, teachers of young learners could quickly locate two critical incidents relating to children: a classroom observation triggering Yumiko’s conflict between her personal teaching goals and external performance standards; and Cindy’s realisation that her approach to reading was failing her pre-literate children .

First, there is a brief onepage introduction to the main issues in the chapter topic.

Then each of the four critical incidents is treated in a cycle of Inquiry Question, the basic concern, for example ‘How do I balance content teaching with language instruction in my contentbased classroom?’;

Previewing the Issue, questions to provoke engagement, for example ‘What are the main advantages with using the process approach in writing classes?’; the Critical Incident itself, as reported by the teacher, followed by the teacher’s own attempt at self-diagnosis and then followup; and Exploring the Issue, where tasks are provided for teachers to investigate the issues in their own context, for example interviewing a mentor teacher to learn more about the orientation process.

The critical incidents at the heart of each chapter cover a range of scenarios and interests and all are credible.

The ‘That is/was me!’ feeling comes up enough when you are reading to dispel any doubts of the book’s relevance.

In fact, probably the most striking critical incidents will be those you can identify with personally.

For example, being interested in pronunciation, I found the case of Rebecca both typical and illuminating.

Rebecca tried to solve the problem of her beginners’ poor articulation by a full-on explicit pronunciation focus at the sentence level.

When this failed, she turned to larger units of discourse and poems until a disastrous rendition of Jack and Jill (of the up and down the hill fame) convinced her that this wasn’t working either.

On reflection, Rebecca realised that she needed to give students some rationale for unlocking the pronunciation point, sentence stress, rather than just asking students to listen and repeat and somehow pick up the fact that stress is not arbitrary.

What is particularly valuable in the critical incident cycle is the Exploring the Issue section.

Whether done for self-development or set as tasks by a mentor, they are genuinely valuable stimuli and practicable.

For example, in the Rebecca case just described, a really solid follow-up presented is to observe a speaking class and then ‘compare the teachers’ stated beliefs about how he says he deals with pronunciation issues in his or her class with what he actually does as you have observed and note the convergence or divergence of beliefs’.

The realisation that we do not always practise what we preach, often for very valid reasons, has implications for every area of pedagogy.

This is a fascinating book and it has convinced me of the value of this approach in teacher development.

It challenges the classic model of teacher training whereby input from experts is presented in a top-down fashion in that it encourages teachers themselves to take control of their own development and appreciates their experiences as material for self-growth.

ELT, as always, is lagging behind mainstream education (see Robinson, 2014) in terms of empowering teachers in their own development and this book presents not just an argument but a means of correcting the situation.

Borg S (2003) Teacher cognition in language teaching: a review of research on what language teachers think, know, believe, and do. Language Teaching 36 (2) 81–109