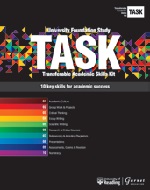 These multi-authored materials have been developed by teaching staff on the University of Reading’s International Foundation Programme and offer a new edition of the original package published in 2006 (reviewed in Modern English Teacher in 2008). They are intended to help students with the transition from secondary to tertiary education: according to the Teacher’s Book (first edition) they were originally designed around the needs of international students, but have been developed and enhanced to cater for students who have already been studying in the British education system. This broad target base goes some way to explaining the wide-angle and eclectic approach of much of the material.

As with the first edition, TASK is offered as an attractive colour-coded set, also available in a boxed version. This new edition comprises 10 modules, which are not intended to be worked through in sequence. These are:

This compares with 12 modules in the earlier version. Some titles are exactly the same (1, 3, 4, 5, 8), some are similar but not identical (the free-standing Introduction to IT Skills of the first edition has gone, presumably because electronic literacy now permeates all aspects of study), and there are two new titles, 2 and 10. It is interesting that, with the exception of writing and unlike many other EAP courses, the materials avoid explicit reference to the ‘four skills’. Or even to ‘study skills’ as such, an indication of the aim of reaching a wider audience at this academic level.

The materials can be used either in taught classes or for self-access study. Each module is a slim volume (maximum 48 pages) containing 4–6 Units. Module 5, for example, deals with the structure of a scientific report, moves on to the individual sections, practices numbers and abbreviations, and finishes with a set of tasks on report revision. The design across all modules is otherwise uniform. There is staged development within each unit, so by the time students reach the more demanding tasks they are in a good position to tackle them. As the Teacher’s Book (p4) puts it, ‘scaffolding is gradually removed’. Each unit begins with a brief ‘bullet’ of what students will be able to do by the end, followed by a relatively small number of tasks and a Reflect section, requiring for example a short essay, a letter, comparison of aspects of academic life with one’s home country, and so on. At the end of each module there are three further sections: Web Work, with some interesting sites providing plenty of extra data; Extension Activities (essays, discussion, further research and the like); and a very useful Glossary of key vocabulary from the module. Taken together, these glossaries represent a good overview of general purpose academic terminology. Finally, each volume has pages for students’ own notes. The straightforwardness of the design makes the whole package very transparent and easy to navigate.

Teachers will find that some modules are more obviously ‘E’ than others, i.e. in line with what one might expect to find on a mainstream EAP course. The most obvious example here is Module 4 on Essay Writing. Others deal with topics that have now become standard in EAP practice, such as Module 3 on Critical Thinking. Yet others have spread into clearly broader territory, in line with the stated ethos of helping students understand the whole context of tertiary level study and the development of transferable skills. This is the case, for instance, with Modules 1 and 10, as well as with individual sections elsewhere. (I was a little puzzled as to the target audience for the Numeracy module, with some very basic work that even this reviewer could cope with. There also seemed to be a missed opportunity here for some language and pronunciation work.) Overall, one very positive aspect of TASK is that it focuses on IFP students and does not claim to be equally relevant to students at higher academic levels. This gives a clear focus and cohesion to the tasks and activities.

On the question of language practice, I could not discern a uniformity of approach across all the materials. Clearly, practice is embedded in some sense just by working through the tasks, and the glossaries always provide a useful summary of vocabulary. However, language is dealt with more explicitly in a number of modules. Module 2, for example, overviews useful language for group discussions; Module 4 covers formal and informal usage, linking words, synonyms, and how to select modality appropriately to hedge arguments. Module 5 has practice on the use of the passive, tenses in general, and on forming plurals.

A further issue for EAP teachers and materials writers is that of topic choice. TASK deals with this in two main ways. Many of the topics, whether for reading, discussion or writing, are substantive and wide-angle, approachable by students from a wide range of disciplines. These include the World Wildlife Fund and wildlife conservation (Module 2), population growth and urban overcrowding (Module 4), bodyweight, obesity and health (Module 6). Other topics are procedural and self-referring, where the topic is the focus of study itself. Thus Module 8 deals almost exclusively with the ‘how to’ of giving presentations (structuring, planning, preparing visuals, giving feedback) with a little work on appropriate language and a few illustrative topics. A key design feature is that most topics are dealt with reflectively and interactively, which is generally effective if a little (for my taste) overdone in places. Occasionally data is taken from ‘real students’ (e.g. Module 6, where students talk about writing in the UK academic culture vs their own countries). This approach will be particularly relevant in the culturally heterogeneous classes found in the UK.

The two rather distinct groups of addressees – UK-based students and those coming into British education for the first time – clearly poses an interesting challenge. There is a certain unevenness in the details of the design, despite its overall uniformity. Put another way, the materials can almost be arranged on a spectrum from mainstream EAP (Essay Writing being the most obvious example), with plenty of language practice, to broader preparation for university study without that specific focus. For a third edition, an ‘overarching eye’ would be useful here. That said, teachers themselves will be able to judge how to adapt and augment some of the material – adding more language work, building in more ‘carrier content’ – to suit the needs of their own specific groups.

TASK is built around an apparently simple concept that works well. The materials benefit greatly from having been written by a very experienced team who are involved in the teaching and who are clearly in touch with the needs of IFP students. I certainly wish that TASK had been available much earlier in my own EAP teaching career.