Listening and Speaking for IELTS 6.0–7.5 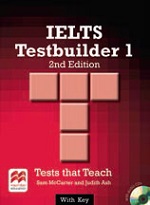 You know how it is: a new student comes in and tells you they need an IELTS score of seven to get into a university course, and they’ve already signed up to do the exam at the end of the month. You test them and find that they’re about 200 learning hours short of that level, at which point they look at you the way you might watch a municipal tow truck hoisting up your car that has been parked correctly but for three minutes too long.

Many learners seem to view the IELTS test as a wave-past, like cruising through a Schengen-zone road border at 50kph, not quite realising that there are some very specific, not to say fiddly, tasks to do and that you still need that critical mass of language in place before you get to grips with the exam itself.

Testing is not the same as teaching. Once upon a time, we talked about A book I’ve used process-writing and product-writing, but that cuts no ice here; as teachers and authors we are here to help you get to your destinations as soon as possible. And that word Destinations takes me back to when I started teaching; it was the name of perhaps the most attractive upper-intermediate coursebook to have appeared by then. It was a time when Cambridge First Certificate still enshrined the British grammar school essay in the writing paper – you know the sort of thing: ‘Which is the best pet for an old lady, a cat or a dog? Discuss.’ – though it was increasingly mocked – sorry, I mean critiqued – as a genre by the profession. Indeed, in a 2012 post called Teaching authentic writing in a socially mediated world, Susan Lucille Davis wrote: ‘I know the five-paragraph essay is dead – and should have been buried a long time ago – because it is a meaningless, formulaic construct.’ (http://gettingsmart.com/2012/06/teaching-authentic-writing-socially-mediated-world/) I can only echo her feeling. Yet the essay has made a remarkable comeback in question 2 of IELTS, and nobody has batted an eyelid. So now that it has been decided that is what you need to be able to do if you want to do an MBA in the UK or wish to settle in Australia, the question is how best to prepare for all the (what some people might find quirky) components of the exam: ‘What? You mean I only hear the audio once!’, ‘What, I have to do the speaking alone, without a partner, and it’s recorded?’, ‘What, I have to answer three different types of questions about one reading text?’. Which is why the testbuilder-type book is such an admirable compromise between the bare bones practice test book that fails to teach adequately and the coursebook that fails to test adequately.

The 2015 edition of Macmillan’s IELTS Testbuilder 1 (originally published in 2003) does everything you’d expect it to: gives detailed information about the test, offers four full tests, includes two CDs in the pack, comes with a full Answer Key, provides tactical advice, asks you all the questions you should be asking yourself as a candidate, as well as suggests semi-visionary tips, such as this one on page 105 in helping you predict answers to the listening: ‘Think of word families and synonyms, as well as the context … Note that even the opposite of what is required in the blanks can help you predict.’ This development of paraphrasing makes more appearances, such as page 11 for the Reading paper, teasing out similarities and differences between The vast majority, A number of, Not many of, Without exception, Nearly all, The entire, A small minority, etc. And of course, this approach can, indeed should, spill over into candidate output on the Writing questions, a section where the Testbuilder’s guidance is even more detailed: ‘Should the verbs in your answer be mainly in the passive or the active?’, ‘What tense would you use in the answer/description? Why?’ (p121). And then, and only then, you do the task. For Writing task 2, there is a clear warning not to simply reproduce the rubric (p124), something examiners are trained to be on the lookout for.

Only after all these steps does the Testbuilder invite the learner to compare what they have written with the model answers at the back of the book. The answers to these Further Practice and Guidance sections are included in the Answer Key, should the learner be working alone or the teacher him/herself (heaven forbid) be unsure. The Further Practice and Guidance for the Speaking (part 3 discussion) includes obvious things that are sometimes not obvious, e.g.: ‘If you don’t understand the question, tell the examiner.’, ‘If you make a mistake and can correct it quickly, do so. If not, don’t focus on it, just continue.’ Then comes a section on developing ideas into sentences. After that, we snap our laptops shut and hope that all this careful, well-thought-out training bears fruit on the big day.

But then of course there’s one thing that a testbuilder cannot be expected to offer, and that’s conscious input, which is where titles like the Improve your skills: Listening and speaking for IELTS 6.0–7.5, come in.* What I’ve found myself doing with IELTS classes is to try to weave together thematic speaking and writing tasks, and provide what I would consider appropriate high frequency and, where relevant, some of that impressive less high frequency or idiomatic lexis that makes its appearance in the examiner’s seven band. These two slim books (116 pages) are reducing my chin-scratching time. In each there are ten thematic units of eight pages, with two pages of lexical input, two pages of training for the Listening and two for the Speaking, followed by a page on pronunciation (let’s not forget that pronunciation accounts for fully 25% of the Speaking assessment, and I was thrilled to see the phonemic chart reproduced in both of these books) and finally a practice test of two of the four Listening parts. Naturally, the themes closely reflect the unusual suspects of the IELTS universe. The pronunciation pages successfully avoid the trap of getting bogged down on individual sounds, dwelling instead on connected speech: shifting stress, contrastive stress, word stress in homographic verbs and nouns, stress in compound adjectives, showing completion, sounding interested (surely one of the most overlooked areas in pronunciation) and incompletion by rises and falls. Clearly, a lot of work has gone into this.

One of the things that impresses me about the lexical input is the attention to collocation, and the way it’s presented in doable amounts, followed by controlled but personalised practice: ‘Make the statements true for you. Tell your partner.’, ‘Do you agree or disagree with the statements …? Give reasons and examples for your answers.’, ‘With a partner, choose five nouns or adjectives from exercises 3 and 4 and explain why the qualities are necessary. Give your own reasons.’ Attention to meaning, an opportunity to practise, and feedback from the teacher. It might have been nice to have this new lexis on the CD too, since if we hope the learners can successfully deploy some of this lexis in the 11–14 minutes they have with the examiner, then part of that success lies in pronouncing it well.

Of course, the greatest challenge for the authors of this kind of material is probably to find enough to say about enhancing listening skills and tactics for the four parts of the Listening test to fill 20 pages in each book. This is achieved not by masses of aesthetic white space or overlarge photos, but by detailed work on paraphrasing and prediction, guided discovery, picking out key phrases (for changing your mind, etc.) and above all activating schemata (‘What’s the difference between a zoo and a circus, predator and prey, …?’), looking at likely language for the highly-scripted audio texts that make up the exam. Perhaps there’s even one final stage missing: analysing why certain answers will get a point and others not; taking that demystification of the exam to its logical conclusion. Or would that be going too far, like showing that royal families are in fact made up of quite ordinary people who are no better or worse than us, just born into a safer job? A safe job, rather.

Winding up then, these are three titles that will equip the learner with a great toolkit to help him/her become a better scoring candidate on those 1–9 scales, almost enough in fact to make you believe in shortcuts.