A good picture dictionary is always a useful thing to have in the primary classroom, and this is certainly a richly-illustrated one that should find favour with young children. There is much to explore in the bright and cheery, but somewhat crowded, pictures, each taking up a double-page spread and focusing on a particular topic, such as Family, At the pet shop, In town, At the supermarket, etc. In fact, some of the more ‘busy’ pictures have a similar look to the ‘Where’s Wally?’ books, in which readers have to find a small character in a striped hat and jersey hidden in a series of complicated scenes. Nevertheless, the artists (Mirelli Mariani and Mercè Ortí – rather surprisingly credited only on the imprint page) are to be congratulated on having squeezed so much into each picture whilst keeping every single item clearly identifiable.

Not all the items shown in the pictures in this dictionary are labelled, but I see this as an advantage rather than an oversight, as too many word labels would reduce the attractiveness of the pictures. Furthermore, I can see children wanting to find out the words for the things that are not labelled as much as the ones that are. Some degree of learner curiosity and learner autonomy may well be prompted by exploration of the unlabelled items, and while the children’s eyes are roving over the details of the picture to see what else is there, they are likely to be absorbing the language from the word labels.

The book comes with an access code for an associated e-book, which features the pronunciation of all the words presented, together with a series of games to consolidate the children’s vocabulary learning (mainly matching games, such as pelmanism and matching picture and audio, but also a fun darts game in which you hear a word and have to hit a balloon carrying the correct picture with a dart).

Someone – either one of the artists or the author – seems to have a bit of an obsession with pirate ships (I counted five throughout the book, but there may well be more), and if one were to be picky, the lifestyles pictured are a bit cosy and middle class but, of course, one shouldn’t expect gritty realism in a dictionary for children. (Having said that, divorced, single mum and single dad are given in the useful phrases section of the ‘Family’ spread, which goes some way towards reflecting the realities of modern life.) Some of the words may also be a little old-fashioned or low-frequency – I can’t remember the last time I needed to refer to a clockmaker or a bearded dragon – but, on the whole, the topics and words are well-chosen. 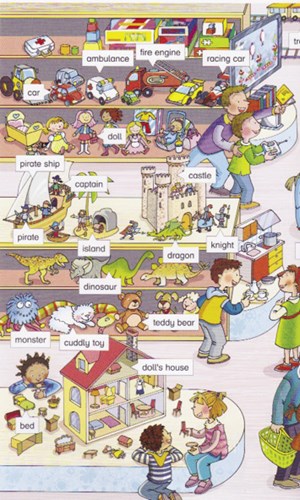 After each of the 25 picture spreads, the labelled words (and other useful words on the same topic) are listed (and colour-coded according to the part of speech), with space for the children to add translations or examples. There are also useful phrases and sentences related to the topic, again with room for notes or translations, plus a couple of illustrations with speech bubbles, showing some of the words being used in short conversations.

The introduction features four sections: ‘Welcome children!’, ‘Welcome teachers and parents!’, ‘Using the HELBLING Picture Dictionary’ and ‘Using your e-book+’. Although the expectation is clearly that the dictionary can be used for self-study, the ‘Welcome children!’ section is written in language likely to be beyond the level of the children for whom the book is intended, so some degree of teacher and/or parental intervention will be needed, at least to get the children started.