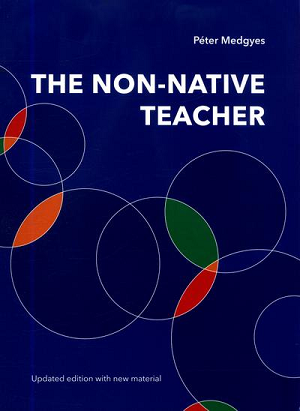 The first edition of this important book was published in 1994; the second in 1999; both are now out of print. The decision to reissue the book is therefore most welcome, as most of the points made by Medgyes some 20 years ago still hold true today. Over the years, a number of theoretical arguments have been put forward to blur the distinction between Native-Speaking Teachers of English (NESTs) and non-NESTs, but as Medgyes points out, the vast majority of teachers of English across the world (97%) are those for whom English is not their first language.

This new edition is printed in two colours. Black font presents the original 1994 text, unaltered. Text written in blue font contains various sorts of additional material: focus points to introduce each chapter; many marginal notes to enable readers to relate the original points to the current situation; and suggestions for further reading, There are also two chapters co-authored by Medyges and colleagues which have been adapted from previously published journal articles. There is a final conversation between Medgyes and Susan Holden, the publisher, which looks ahead to a more positive future for non-NESTs.

The book consists of six parts, each containing two chapters. Part I sets the scene for all that follows by considering the position of the non-NEST in terms of the global spread of English (‘The juggernaut called English’) and whether native- and non-native speakers are a dichotomy or a continuum (‘Is the native speaker really dead?’). Here, as in the following eight chapters, the many marginal points raise questions to stimulate readers to think about the extent to which the situations and attitudes described by Medgyes in 1994 still pertain today in their own contexts.

The focus shifts in Part II from the speaker in general to the non-native teacher of English. In the third chapter (‘A teacher-centred approach’), Medgyes argues that, even in an era of learner-centredness, the teacher holds the key position, and discusses the respective roles and responsibilities in the power relationship between them and their learners. In Chapter 4 (‘Natives and non-natives in opposite trenches’) he reports some of the findings of three surveys he carried out to substantiate four hypotheses: i) that NESTs and non-NESTs differ in their language proficiency; ii) and in their teaching behaviours; iii) that such difference are accounted for by the discrepancy in their language proficiency; and iv) that they can be equally good teachers in their own terms. These surveys are also used to inform subsequent chapters, and the actual questionnaires are included among the appendices.

Part III is the crux of the book, where the author considers the ‘dark’ and ‘light’ sides of being a non-NEST. He argues in Chapter 5 that the former is essentially rather trivial, focusing as it does on the assumption that non-NESTs have a ‘linguistic deficit’. However, a serious consequence of this belief is that many non-NESTs feel inferior and stressed about their lack of communicative proficiency – although it may be said that frequently non-NESTs have a greater linguistic competence than many of their NEST peers! By contrast, in Chapter 6 Medgyes looks at ‘The bright side of being a non-native’ by discussing in detail several advantages they have over NESTs: i) they can provide an achievable model of English for learners to imitate; ii) they can as effectively as NESTs teach language learning strategies; iii) they are able to provide students with more information about the target language; iv) they are likely to be better able than NESTs to anticipate and prevent language difficulties; v) also as a consequence of having themselves been learners of the language, they are more empathetic to the challenges their learners face; and vi) they can make use of the learners’ mother tongue, for example to explain difficult concepts. (Of course this only applies in contexts where non-NESTs and their learners do share the same language; increasing numbers of non-NESTs are teaching outside their home environments.)

Chapter 7 (‘Who’s worth more?’) focuses on the various educational contexts in which NESTs and non-NESTs might be employed, and, based on the results of one of the surveys introduced earlier, the prejudice that may hinder the latter from being selected on the assumption that the ‘ideal’ teacher is a NEST. Medgyes concludes Chapter 7 by offering tentative definitions of ideal NEST and non- NEST teachers. In the following chapter (‘Collaboration between natives and non-natives’) he discusses the various ways that the two sorts of teachers can fruitfully cooperate both in the wider school context and within the language classroom, with particular attention paid to team teaching.

Part V emphasises the need for language teachers – especially non-NESTs – to be continual learners throughout their careers. In Chapter 9, (‘When the learner is teaching’) Medgyes discusses the language improvement components in pre- and post-experience courses and various professional activities that teachers can do for themselves before and during actual language classes. Chapter 10 (‘When the teacher is learning’) explains a number of ways by which non-NESTs can autonomously develop specific micro-skills in speaking, listening, reading and writing.

The two chapters in Part VI report research that Medgyes conducted following the earlier editions of the book. Chapter 11, co-authored with Valeria Arva, discusses a study that explored the practices and perceptions of five NESTs and five non-NESTs working in Hungarian secondary schools. After asking them to ‘teach as normal’, one lesson by each participant was videorecorded, and these were followed by a post lesson discussion with each observed teacher. While the findings were interesting, apart from obvious factors due to differences in linguistic proficiency, no firm conclusions could be drawn because of the very disparate backgrounds among the participants. In Chapter 12, Medgyes and Eszter Benke report the findings of a survey of 422 Hungarian learners of English about their views on the respective advantages and disadvantages of NEST and non-NESTs that they had experienced. The findings suggest that the respondents appreciated both groups of teachers and that, in an ideal situation, both NESTs and non- NESTs should be available to teach them.

I said at the beginning of this short review that this is an important book. The reason is that the issues raised by Peter Medgyes more than 20 years ago are still relevant today, as is clearly shown by the many sidebar comments and questions to stimulate the reflections of current readers. In my own professional career of over 40 years I have worked with hundreds of language teachers, the vast majority of whom are non-NESTs. As is the case in every profession, there are good, indifferent and inadequate teachers, and the first language of the teachers is only one among many – often more important – factors. It is a great pity that ‘native speakerism’ is still alive and kicking when the issue should have been done and dusted many years ago. Its continued existence fully justifies the revision of this book. Members of the ELT profession need to consider the arguments put forward by Peter Medgyes, reflect on the continued dis-privileging of non-NESTs, and take action to remove discrimination in the contexts in which they work.

Readers interested in watching Peter Medgyes talking about his book can do so by following this link: https://www.youtube.com/watch?v=8JXB7-BBXtQ