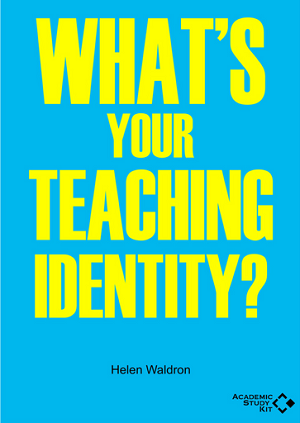 As Helen Waldron states in the Introduction, identity ‘is a very complex issue’ so I was curious about what she would add to the topic in a mere 26 pages. Teacher identity is very well covered in the academic literature and Crandall & Christison (2016: 11) acknowledge as central ‘the development of a teacher identity, identifying with language teaching as a profession, and, over time, becoming the type of teacher one desires to be’. However, Helen is candid that her contribution is not an academic paper. The anecdotal tone and grassroots application (at last, a book written by an actual teacher!) make it clear that her audience are busy teachers, who often find the academic literature too abstract and remote even when they get time to read it.

Helen sets out her own definition of identity:

When Helen asked a sample of teachers to describe their teaching identity in one word, the responses all fell into the first two categories, leading Helen to the conclusion that teachers are primarily inward-looking. Teachers create an identity through self-image. There is no sense of a wider community which approves of their work and gives them a sense of professionalism.

Indeed, Helen argues, what characterises EFL teachers, especially those working in the unregulated private language school sector, is a sense of inadequacy and even shame. The pathos of the following is worth quoting at length.

‘Maybe I’m being oversensitive, but am I the only person who holds back when the small talk at a party turns to jobs? I simply find it hard to talk effusively about my work. I don’t talk anecdotally about my students for discretionary reasons, neither can I simply give a few self-explanatory facts, whether profession-based (“I’m a doctor”) or company-based (“I work for Big Company”). If pushed, I explain that I’m a teacher, but not a teacher that works in a school, not a real teacher (yes, I’m sure I have said this), usually before petering out completely. It’s sad and it’s because we’ve failed to take ourselves seriously enough to forge the outward signs of a professional identity by which others can recognise us. Instead of being embarrassed about ourselves, we should be reaping the rewards of all this work and investment we’ve put in. Actually, I know I’m not alone in this, because when I asked my colleagues a similar question, one of them answered, “No problem. I simply tell them I’m a journalist.”’ (p11)

There is a portrayal of EFL teachers as not fitting the mould. The general public would seem to identify ‘real’ teachers as people who go into schools in the morning and leave in the afternoon, receiving generous holidays. They would be confused by the picture painted in this book of itinerant teachers working from morning to night, seven days a week, deprived of paid holidays and yet expected to pay for their own qualifications. If someone lives like that, that must be because they have no other choice, mustn’t it?

It is worth pausing here to consider the reality of Helen’s position. First, the very limited literature on professionalism within EFL supports her point that EFL teachers are inward-looking and do not identify with a community of professionals, as Johnston (1997) found when interviewing EFL teachers in Poland. This is probably why so few teachers see the point of teaching associations let alone join them. Second, self-evident to anyone reading this magazine, poor working conditions and low remuneration are endemic in EFL, as Wright (2016) notes in a survey of 800 EFL teachers in France.

This is a depressing picture so far and while there is no panacea – this is just the way things are in EFL – Helen provides three avenues to create a stronger identity. The first is to realise and appreciate what she calls (p16) our ‘uniqueness’ as teachers, how you make a difference. We may be undervalued, but we can still be valuable. Then there is ‘affiliation’ (p17) or identifying with others in the same plight, a process which is facilitated by social networking. Finally, Helen calls for ‘continuity’ or a long-term personal plan, although this is rather a mixed message as she goes on to bemoan the lack of support in EFL for any kind of vision. Appended to this is advice on resolving the conflicts inherent in reconciling education and business and the need to preserve boundaries between work and personal life (if you go out socially with students, they shouldn’t expect you to correct their mistakes). In short, it isn’t possible to change a whole industry, but we can change your own attitudes and form an identity which is robust enough to withstand the chaos going on around us.

I found What’s your Teaching Identity? absolutely riveting and read it in one gulp, often with an inward ‘Yes, that’s so true’ or ‘Yeah, that’s me!’. Only an independent publisher would come up with something so brutally honest and disdainful of the pretty bleak status quo which characterises the ELT industry. What’s your Teaching Identity? makes uncomfortable reading, but it touches subjects like working conditions and status which are often swept under the carpet. My only criticism is that much more could be said but as this is the first book in a Legacy Series, I expect the message to be expounded upon, for those brave enough to read on.