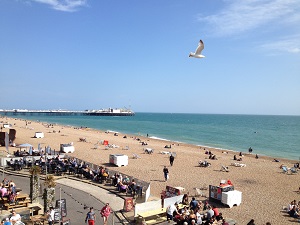 After much anticipation, it was finally the week of the ETp Live 2015 conference. As I excitedly made my way to Brighton from York (can you believe it takes as much time travelling by train from London to Brighton as it does from York to London?), I got on Twitter, Facebook and What’sapp and messaged the colleagues and friends I knew were going to be at the conference, arranging to meet up with them for dinner and drinks. I couldn’t wait to catch up on all the latest news and get into some interesting discussions and debates in person.

I also couldn't wait to attend the plenaries, the talks and the workshops lined up on the programme and as I shouldn’t bore you with tales of me catching up with old friends and colleagues, I could hopefully give you a taste of what the ETp Live! Conference was like by giving you a summary of the talks I attended during the conference.

Famous materials writer and founder of the Round, Lindsay Clandfield started his opening plenary ‘Six reasons why language teachers should love lists’ by telling us how much he loved making lists and how lists were popular even in history dating as far back as the rosetta stone. In religion and popular culture, we see lists like the five pillars of Islam, the ten commandments, and Santa’s list of the naughty and nice. Online, we have ‘listicles’ (articles written in the form on lists) such as the familiar format of  ’10 things we need to know about dieting’, ’10 celebrities and their lookalikes’, and other articles we often get bombarded with on social media websites. 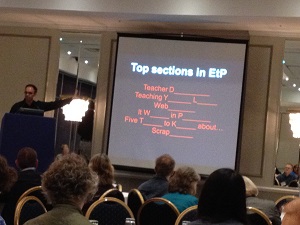 Lindsay then goes on to elicit the different types of lists we can think of: to do lists, shopping lists, short lists, reading lists, black lists, attendance lists, etc. Lindsay then gives us some practical activities we do in the classroom by using some of these lists.

Teacher spells out names of students very quickly. When student hears their name, they call out ‘present’ or ‘here’.
Alternatively, when the teacher calls out a name, the students must answer with a word starting with a certain letter, or with a word in a certain category:
e.g. Teacher: Maria
Maria: Camel
Teacher: Andrea
Andrea: Monkey

Put students in pairs and have them make a list of 4 things they have to do, 1 of them they’ve already done.
Have students then show each other their to-do lists and ask each other, “Have you done this yet?”, practicing the present perfect.

Looking at a who’s who list that have had their headings taken out, students have to try and figure out what these people have in common.

Have students make personal lists like ‘Your top 5 jobs’ or ‘Your top 5 favourite television programmes’ and discuss the reasons for their lists with the class.
A favourtie amongst the audience was this alternative personal list: Get students to make a list about the good and bad things about their name.

Here’s mine as an example
Good things about my name:
It’s unique and so it’s easy to find me on Google or Facebook; in Chinese, it means virtuous and beautiful; etc.
Bad things about my name:
In the UK, banks and government organisations think ‘Suan’ is my middle name, when actually ‘Chia Suan’ is my first name; people try to put a hyphen in my first name to make it look like one word; etc.

As the conference delegates filter out of the opening plenary feeling very pleased with the bagful of useful classroom activities that they can now add to their repertoire, there was coffee and tea in the exhibition room where I coincidentally stumbled upon a book that I took part in writing and hadn’t known it had been published! 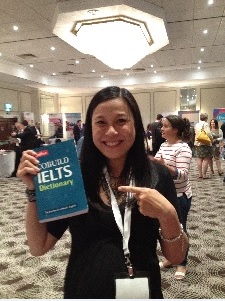 That put a huge smile on my face as I made my way to the next talk: ETp’s regular contributor Russell Stannard’s ‘How technology can be used to develop reflection and peer feedback’.

While John Hughes spoke about his top tips for develop our material writing skills in a parallel session, I stayed downstairs listening to Russell Stannard’s talk about his interest in oral skills. Russell cites it as the reason for most people wanting to learn a language and quotes Paul Nation saying that the fluency activities we do in the classroom should be easy and the language items should be 100% familiar and learners should be focused on meaning and produced a message. Learners need to be pushed and challenged to go faster. The quicker we can speak and be fluent, the more extra time we get to think about how we want to say something.

Using the experiments of Peter Schenider and David Kluge where students worked in groups, recorded themselves speaking and subsequently self-evaluated their recordings, Russell tried to do the same. Mainly using a tool called Vocaroo, Russell had his students record their discussions and fluency practice and used a website like Blogger to store the recordings.

He then introduces myBrainShark as a place where students can record their presentations.
(Click here to see Russell’s website for tips on how to use myBrainShark )

But as a result, he then ended up having a lot of recordings to give feedback on.
So rather than giving feedback, he gave students a checklist or guiding questions to encourage students thinking about their own work or presentations and encouraged students to give themselves feedback. Students then chose which piece of work was going to be put forward for formal feedback from their teacher.

After Russell’s session, I made my way upstairs to Laura Patsko’s talk ‘English as a lingua franca and the multilingual classroom’, which ran concurrently with Claire Hunter’s session on using ted.com to wow our students. 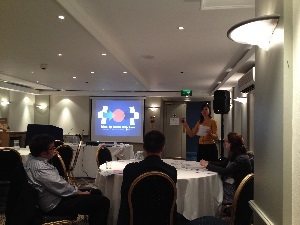 Laura typically taught students who would go on and communicate with others who spoke English as a second or foreign language and encouraged us to question ourselves as to what we are preparing our students for with the activities that we do and the feedback that we currently give.

Quoting Jenkins (2000) as saying that pronunciation is often the most common cause of miscommunication among NNS speakers, Laura look at how we can better prepare our students for the communicative scenarios they will go on to face. First of all, we need to anticipate their needs, and then we need to observe our students to ascertain that we are on the right track with our anticipated needs.

Things we do to anticipate our students’ needs
1. Profile your students:

EFL? ELF? ESOL? Although the common assumption is that these students have come to England to learn English and therefore need British English and British culture, but in actual fact, what they need is to learn English as a lingua franca. And within the multilingual classroom, they are already using English as a lingua franca. “English is the communicative medium of choice, and often the only option (Seidlhofer, 2011)

How many different L1s are there in the classroom?

Are their L1s from similar language families? (e.g. Do the different languages come from Latin-based languages? )

What do you/they know about these L1 backgrounds?

2.  Piecing the puzzle together

How much overlap is there between the various L1s?

Benchmark for intelligibility: Lingua Franca Core (what is necessary for clear international communication)

So what’s in the core?

Most consonants but not the ‘th’

Consonant clusters (especially at the beginning and middle of words. Not so important when they occur at the ends of words)

Vowel length contrasts (e.g. the vowel in ‘right’ seems shorter than the vowel sound in ‘ride’) – something we never teach and yet is important in being understood.

The ‘BIRD’ vowel. – the other vowels are not as important. The length of vowels is but not vowel quality.

Here, Laura shows us a worked example of her sample students from the following background: French, Italian, Turksih and Japanese. 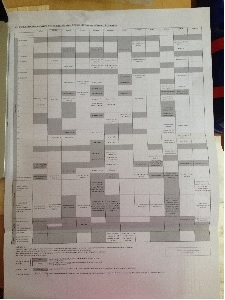 Using the above chart Laura had developed, she anticipated their common needs and then observes to see if these are indeed the pronunciation issues they have.

Suggesting student-to-student dictation as a good way to get students to help you see what is intelligible and what isn’t, Laura warns that if you only speak English as your first language, you probably aren’t the best judge of what is intelligible in an ELF context. Your students are probably better judges of that.

Laura then uses the student-to-student dictation exercises to help her look for evidence of breakdown of understanding due to pronunciation, and is sometimes surprised by the results that she finds.

As my own research area is also that of ELF (English as a lingua franca), many of Laura’s findings weren’t particularly surprisingly for me, but I walked out of Laura’s talk feeling impressed by the research she had done and especially pleased by the fact that she had clearly got a roomful of teachers, many of whom had never even heard of the lingua franca core, thinking and reflecting upon what she was saying, and re-evaluating the appropriateness and relevance of their course materials and course content for the students they teach.

In my next blogpost, I will continue with summaries of the workshop by Danny Norrington-Davies and the closing plenary by Nicky Hockly.

Seidlhofer, B (2011) Understanding English as a Lingua Franca, OUP.
Jenkins, J. (2000) The Phonology of English as an International Language, OUP.