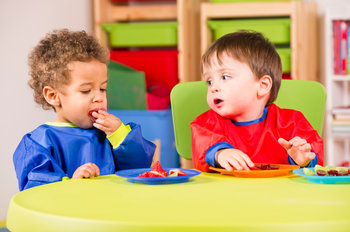 Although the process of First Language Acquisition (FLA) and Second Language Acquisition (SLA) have often been compared, there is enough evidence and general consensus that the two process are significantly different enough, so much so that many English language teachers like ourselves tend to solely look towards SLA theories and findings to guide our principles and practices, and dismiss anything related to FLA.

But as a mother of a two-year-old girl, and someone fascinated by the process of language acquisition (whether it be first or second language), I’ve been watching her language development with great pride and interest, and found myself drawing parallels between FLA and SLA. There were enough similarities to SLA that motivated me to write this series of blogposts.

Here are my initial, albeit unscientific, observations.

1. Words are learnt out of necessity. The necessity to communicate.

Some of my daughter’s first words were ‘mama’, ‘dada’, ‘no!’ and ‘more’.  She uses ‘mama’ and ‘dada’ to get our attention, ‘no’ for refusals and ‘more’ as a general request for things, usually food, but that quickly progressed to asking to do a favourite activity again. This could be the reading of a book, the singing of a song, etc.

Her range of words quickly progressed to the different names of food (‘water’, ‘rice’, ‘bread’, ‘carrot’, ‘cake’, ‘ice-cream’), with foods that she liked taking priority.

My daughter doesn’t learn a word because it’s on her syllabus or our agenda. She learns it because it gets her what she needs. 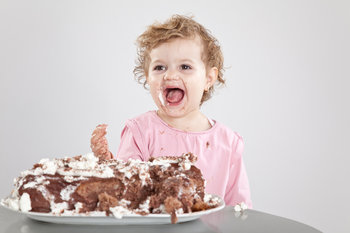 2. Words that are encountered most frequently are learnt. Repetition works.

Perhaps seemingly less useful than ‘water’ and ‘cake’, but experienced just as frequently are words like ‘cat’, ‘dog’, ‘chicken’, and ‘cow’ and all the corresponding sounds that these animals make. These words appear in many of the songs and stories she encounters and come with pictures and fun visuals to remind her of what the words/names refer to. She picks them up because it helps her understand the world around her… and because they are great fun!

3. Words are learnt in chunks. Words that go together are learnt together.

We often end each round of peekaboo with the exclamation ‘There she is!’ and ‘All gone!’ and so it is unsurprising that my daughter has learnt those words together as if they are one. She has gone on to do this with other phrases too, e.g. ‘Where is it?’, ‘Daddy’s sleeping’ and ‘stopped raining’.

No one gave her the rules to forming the present continuous or told her that ‘stop’ is following by a gerund/-ing form.
She seems to have picked those structures up as lexical chunks.

Rather than seeing language as a network of linguistic rules full of algebraic procedures, children seem to organise their speech into syntactical patterns simply by copying certain chunks of language and noticing the patterns in which they are used. Perhaps the distinction between grammar and lexis isn’t as clear as we’d like to think it is, as reflected in the lexico-grammatical cline of Halliday’s (and Matthiessen, 2004) functional view of grammar. 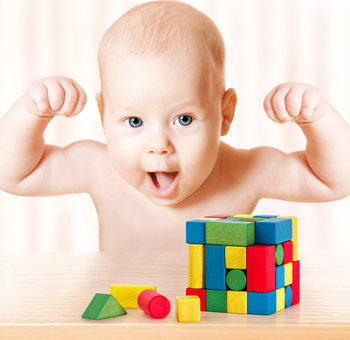 4. There is great power in using the skills of induction and detecting patterns to deduce meanings.

There was a day when it was drizzling and I had to walk my daughter in her pushchair to her swimming lesson. During the entire 30-minute walk, she must have repeated ‘It’s raining!’ about 100 times to herself, probably because I had said it a few times before leaving the house.

When we got to the changing room by the pool, there were a couple of under-six-month-old babies crying and my daughter came to me and exclaimed, ‘Baby’s crying!’

Skinner (1957, in Tomasello, 2003) suggested that alongside principles of association, principles of induction can be used to enable children to detect patterns and deduce meanings, putting stimuli into generalized categories. Such pattern-finding allows for statistical cues in the sounds of words to be exploited, word forms to be learnt, and subsequently, meanings to be attached to them (Kuhl, 2000).

Chomsky (1965) claimed that children are born with a hypothesis-making Language Acquisition Device (LAD) that provides the foundation for constraining and evaluating input, guiding the rule-discovery of a child’s native language.

But by cultivating and encouraging the skills of hypothesis-making, pattern-finding inductive learning can help second language learners ‘own’ the syntax that they use. See here for an example of how this can be done. 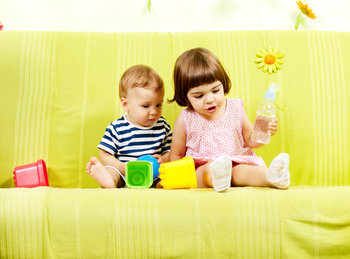 5. There seems to be an order of acquisition.

When studying the language development of three children, Brown (1973) discovered that there was an order of acquisition in which grammatical morphemes were acquired. The present progressive ‘-ing’ (Daddy singing) is mastered at an earlier stage than the regular past ‘-ed’, while the third person singular ‘-s’ (Daddy sings) was considered a late-acquisition item.

My daughter might seem increasingly comfortable with using the present continuous, but aside from the use of past participles in fixed phrases and as adjectives, e.g. ‘All done!’ and ‘Broken!’, she has yet to experiment with past tenses.

Could it be that the present continuous ‘to be + -ing’ form sounds significantly different and therefore more easily noticeable? Or is it that the meaning it carries actually matters and therefore the form becomes necessary to acquire quickly.  (Compare this to the third person ‘s’ that notably does not affect meaning as much.)

Whatever the reason might be, the fact is the existence of a natural order of acquisition suggests that no matter how seemingly simple the third person ‘s’ might be, you just can’t force its acquisition.

The learner will acquire it when they acquire it. 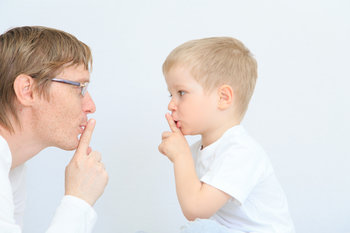 6. Imitation without a fear of mockery is worth more than you realise.

My daughter seems to take great pleasure in imitating everything I say, from the intonation to the stress patterns of the sounds, words and sentences she hears. And in doing so, she of course produces all kinds of gibberish amidst some amazingly spot-on imitations. She echoes me when I nag her ‘Sit down!’ and when I tell her off ‘No biting!’ and we roll around laughing at some of things she tries to say.

It is obvious watching her that there is not a shred of self-consciousness or embarrassment in the imitation. And why should there be? The ability to play with language, have fun with it, and make as many mistakes as you can while doing so is all part of the experimentation process.

And to help second language learners lower their inhibitions and return to that fearless state, designer methods such as Georgi Losanov’s Suggestopedia encourage students to take on new identities in the form of stage characters.

A less extreme alternative would be to use role-plays and drama in the classroom and to foster a classroom environment that is conducive for students to experiment and to make mistakes without being made to feel self-conscious about it.

In my next post, I will look at how socialisation, collaboration and the ability to put oneself in another’s shoes seem to affect my daughter’s and perhaps my learners’ language acquisition processes. 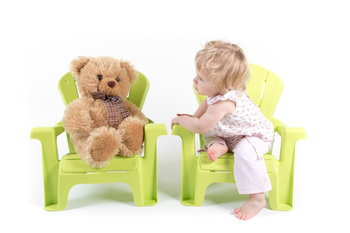