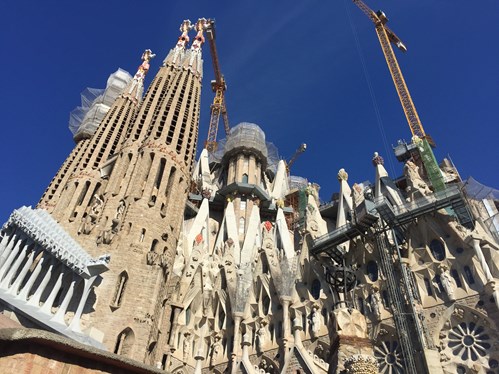 The International House Barcelona ELT conference is one that has been growing both in numbers and in strength year upon year ever since it began in 2002. A quick glance at the speaker line-up of this one-and-a-half day event, and you’d be looking at a list of ‘who’s who in ELT’, starting with John Field, author of Listening in the Language Classroom; Monica Poulter, Teacher Development Manager at Cambridge and a familiar name to every CELTA tutor; and Dorothy Zemach, author, editor and plenary speaker for the up-and-coming IATEFL conference in Brighton. Then there are coursebook writers Philip Kerr (Inside Out, Straightforward), Antonia Clare (Speak Out, Total English), and Jo Gakonga (IELTS Foundation). IATEFL SIG co-ordinators Sophia Mavridi (Learning Technologies SIG) and Andy Hockley (Leadership and Management SIG) appear, along with IATEFL trustee and academic head of training and developing for IH World Organisation Shaun Wilden, Chair of LONDOSA Josh Round, founding member of IATEFL Poland Ania Kolbuszewska, author and director of technology for The Consultants-E Gavin Dudeney, and so many more.

One would be forgiven for thinking that the IH Barcelona ELT conference is able to attract such a star-studded cast of conference speakers because some of the best ELT-ers live in Spain. After all, among this year’s speakers, author of Teaching the Pronunciation of English as a Lingua Franca, Robin Walker, ETp regular contributor and ‘ideas man’ Chris Roland, experienced teacher trainers Gerard McLoughlin, Vicki Anderson, Roger Hunt and Shaun Sweeney, and famous ELT writer Scott Thornbury are all based in Spain. But the conference organisers have certainly not let geography limit their speaker choices, flying some of their 35 speakers from as far as the United States. And the conference delegation has in return mirrored this, with more than 500 participants, travelling in from as many as twelve countries from as far as Moscow and Minsk. 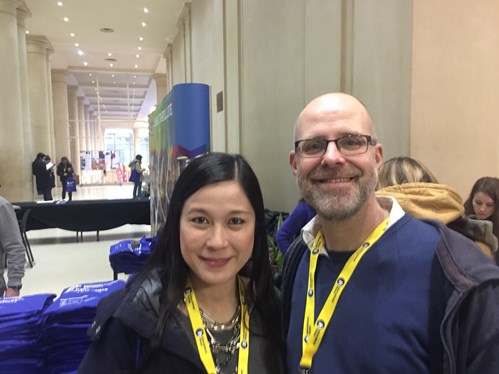 Getting together with fellow Pavilion writer Danny Norrington-Davies before the opening plenary.

I was fortunate enough to have been invited to deliver one of two morning plenary sessions, in which I spoke about how we can help our learners become more effective international communicators. (See my previous post Who’s responsible for successful communication?, What does it mean to teach culture?, and 5 reasons why native speakers need to learn to speak English internationally. Also, see my feature article in the coming issue of English Teaching Professional No. 115.)

Spoilt by the large range of talks at the event, I took the opportunity to attend a few talks of interest to me. Followers of the @etprofessional Twitter account who have been privy to my live tweets, I’d like to thank you for your multiple re-tweets and for engaging in discussion about the talks I tweeted about. The talk that prompted the most debate on Twitter was the first plenary of the conference by author and psycholinguist John Field. The talk title ‘Opening Pandora’s Box: Listening and the language teacher’ should have been a clear warning of what was to come as John wasted no time in deconstructing the ‘Comprehension Approach’ to teaching listening.

John Field and his opening plenary.

Traditionally, teachers would first set a pre-listening task to activate the schema and prepare their students for the language that is about to come. They would then set questions to help students know what they are listening out for before playing the recording. This is followed by the teacher checking the students’ answers and then perhaps replaying the key sections that students might have had issues with.

Suggesting that we should drop the pre-listening stage, John argued that ‘activating schemata’ and pre-teaching did not reflect real-world listening events (see my article about the dangers of pre-teaching.) He added that, very often, the issues our learners have with listening are not due to the content or the script, but are a result of the way the speaker speaks in the recording.

Addressing the issue of setting questions before learners have the chance to listen to the recording, John reasoned that this would give away a lot of what is in the recording, and that it would promote test-wise strategies that encourage students to listen out for keywords and not actually follow the logic of what is being said.

Instead, he suggested that we should abandon the pre-listening stage and go straight into the first play of the recording, where learners get to adjust to the speakers’ voices and accents and listen globally without focusing on any particular question. Questions should be set between the first and second play of the recording, and used to diagnose learner problems (e.g. perceptual vs conceptual).

Leaving us with much food for thought, Monica Poulter took over the podium in her very practical talk ‘Develop your training skills with Cambridge’. The audience was treated to a couple of videos that featured a teacher trainer giving feedback to a teacher after a lesson observation, and we were all reminded of the dangers of over-eliciting and getting teachers to ‘guess what’s on our mind’. Monica highlighted the importance of being positive and focusing on the teacher’s strengths and not just the weaknesses, offering the ‘feedback sandwich’ as a model to follow. In a pairwork activity during the talk, I, however, mentioned that the effectiveness of wrapping negative feedback with positives and the indirectness of such a model might be entirely dependent on the culture of the receiver and the type of feedback they are used to. The ‘sandwich’ approach to feedback might be Anglo-centric and might not apply to all situations (read my article on understanding intercultural communication and giving feedback.) 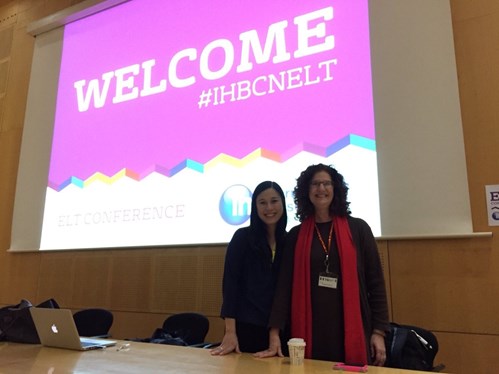 Posing with Dorothy Zemach before our Saturday morning plenaries. Photo by: Joanna Budden.

On Saturday morning, Dorothy Zemach started our day with a humorous presentation featuring some laugh-out-loud examples of ELT textbooks that violated some of the basic rules of material creation, e.g. the use of useless, low-frequency vocabulary, de-contextualised dialogues that do not make sense, materials that feature in-jokes that mock the students, characters that know they are in a textbook, and many more. Cleverly providing a checklist for materials we endorse or create for our students, Dorothy’s session was a great reminder of what might seem like common sense to some, but not so common to others.

After my plenary, I spent the rest of my Saturday attending a couple of LAMSIG sessions, including Andy Hockley’s talk on ‘Managing Up’ and how we can build a relationship with our manager, ensuring that our contributions are valued and our voice is heard. This was followed by Loraine Kennedy’s talk on coaching skills and using coaching to bring out the best in others. While Andy reminded us of the importance of understanding communication styles and to communicate with our boss the way they’d like to be communicated with, Loraine emphasised the importance of tailoring our management style to the people we manage, using coaching, mentoring, delegating and directing styles when appropriate. It is no surprise that someone on Twitter (@TransformELT) noticed the trend between my talk and Andy’s, suggesting that effective communication might perhaps be the theme of this conference.

After lunch, I attended Antonia Clare’s inspirational talk on language learning and the creative mind, where she suggested some useful activities we could use to motivate learners. I followed that with Shaun Sweeney’s ‘Stop, Collaborate and Listen’ where I got to show off my knowledge of Vanilla Ice’s lyrics before buckling down to consider how we can make our listening lessons more effective and engaging. Agreeing with John Field’s plenary, Shaun also advocated a minimal lead-in/pre-listening stage, and offered some concrete ideas on how we can help students target specific issues they have with understanding. A highlight of Shaun’s talk for me was the recommended website PlayPhrase.me where teachers could type a phrase that students commonly have an issue understanding e.g. ‘wanna/gonna’. The website then searches for all the video clips featuring that phrase from its large database. A definite tool to add to our technological toolbox!

For the penultimate session of the day, I went to Danny Norrington-Davies’s talk ‘From rules to reasons and other little tweaks’. Based on his book Teaching Grammar From Rules to Reasons, Danny looked specifically at how we can adapt reading texts in our teaching material to incorporate more evaluative questions. In an argument that seemed to expand on John Field and Shaun Sweeney’s gripe with coursebook comprehension questions, Danny posited that most comprehension questions in coursebooks tend not to be particularly engaging or cognitively demanding, encourage a testing procedure where reasons for the answers are not explored, and have answers that are pre-chosen by the materials writer. It is ironic that the one person with control over the answers is the one person who is not in the classroom!

Instead, Danny suggested using questions that allowed learners (including low-level students) to develop their ideas, questions, opinions and definitions. The teacher then works with what emerges and might choose to have students give reasons for the use of particular structures. It was interesting that Danny chose low-level learners as the focus of his talk, highlighting the fact that someone with a low proficiency in the English language is not necessarily someone with a low IQ and are equally capable of critical thinking and talking about deeper subjects (something that course books do not often reflect). 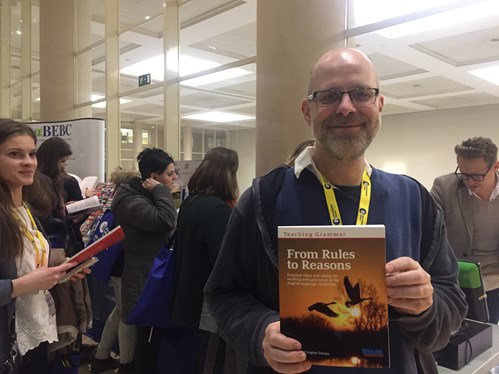 Danny with his book From Rules to Reasons.

In the closing plenary of the day, Scott Thornbury spoke of hyperpolyglots: those who can speak 11 languages or more. Introducing some of the famous hyperpolyglots of history, Scott considers the different characteristics that they have in common: e.g. having a good memory, motivation and perseverance, skilled at pattern detection, learning through self study, and having conversations with themselves in the target language. Among the strategies often used are shadowing (repeating what is said), memorizing texts/dialogues, memorizing chunks, using distributed practice/spaced reviews, and mnemonics.

A worthy target to emulate, these hyperpolyglots teach us that if we want to be good at languages, we need to set achievable targets, experiment with different strategies, be resourceful, find a conversation partner to practise the language (even if that partner is ourselves), put time aside regularly to learn, and visualize our L2 self who can speak that language.

On that very inspiring note, Scott wrapped up an excellent conference as delegates poured out of the INEFC building onto shuttle buses catered by the conference organisers taking us to refreshing post-conference drinks at Plaça d’Espanya and more conversations about the useful things we had learnt that day. Well done, IH Barcelona! You’ve put on a truly international event for us English language teachers! Until next year… 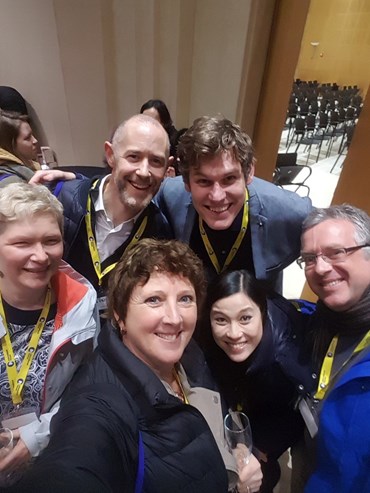 Some of the most amazing colleagues that I had the honour to hang out with at the conference. Photo by Loraine Kennedy.